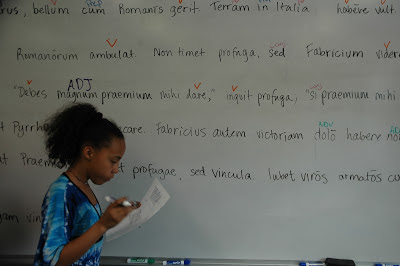 When RobertPondiscio wrote “How to Get a Big Vocabulary,” I knew it was just a matter of time before my defenses would weaken, and I would have to start spouting off about the beauty of language, Latin, etymology, and classical roots. I can’t help it. I get excited about these things. I teach Latin, English, and writing, and my happy place lies at the nexus of these subjects.
Just when I thought it was safe to take a break from grading my students’ writing assessments and see what’s happening on the internet, Core Knowledge blog reader John Webster had the nerve to ask specifically for a Latin teacher’s opinion on the value of Latin, and Robert had the unmitigated gall to publicly provoke me into a response to John’s comment.
@Robert (comment 30). Here in Minnesota, I know of several public schools that offer – require – Latin. They’re called charter schools, and all of them are also Core Knowledge schools. Yet another reason why some alleged supporters of Core Knowledge who oppose all charter schools are in no practical sense real friends of Core Knowledge. My two kids, 9th and 7th grades, study Latin and do the obligatory grumbling about having to learn a “dead” language. I rely on the authority of teachers I respect that Latin helps in developing literacy and vocabulary skills, but I’ve never read anything addressed to laypeople why this is so. Anyone know of any articles/essays that explain the value of Latin, or can any Latin teachers in the CK blog audience explain this value in a practical, meat-and-potatoes way?  Comment by John Webster — December 27, 2012 @ 8:07 pm
Before I get all in a twist about the word “value” as it relates to anything I teach, (Latin valere, to be strong, vigorous, in good health, to have force) let me begin with the low-hanging statistical fruit, all thanks to Bolchazy-Carducci, the publishers of the textbook, Latin for the New Millennium:
1. Studies performed by the Educational Testing Services show that students of Latin outperform all other students on the verbal portion of the SAT.
2. In the District of Columbia, elementary school students who studied Latin developed reading skills that were five months ahead of those who studied no foreign language and four months ahead of those who studied French or Spanish. Two years earlier, the same students had been excluded from foreign language classes because of substandard reading performance.
3. In Philadelphia, students in the fourth, fifth, and sixth grades received 15 to 20 minutes of daily instruction in Latin for one year. The performance of the Latin students was one full year higher on the Vocabulary Subtest of the Iowa Tests of Basic Skills (ITBS) than the performance of matched control students who had not studied Latin.
4. Sixth-grade students in Indianapolis who studied Latin for 30 minutes each day for five months advanced nine months in their math problem solving abilities. In addition, the students exhibited the following advances in other areas:
·      Eight months in world knowledge
·      One year in reading
·      Thirteen months in language
·      Four months in spelling
·      Five months in science
·      Seven months in social studies
But the fun part – the “value” – in learning Latin has nothing to do with these statistics or test scores. It lies in the evolution of our language, the stories revealed through etymology, the history of our culture articulated through the words we preserve and the words we discard.
As Robert’s post points out, a big vocabulary does not come from sheer memorization. Anyone who has ever been subjected to an 11th-hour SAT prep course knows that. It comes from a deeper understanding of word origins and repeated exposure to novel words through reading. If I know that the Latin acer means “sharp,” I can deduce that “acid” has a sharp taste, an “acute” angle is sharp, “acrid” is a sharp smell, and an “acerbic” person has a sharp wit.
I am all for the memorization of vocabulary; in fact, my school teaches vocabulary using a lovely series called Vocabulary from Classical Roots and my students memorize their share of vocabulary lists. However, if we want our students to achieve true depth and breadth of vocabulary, it’s worth spending some time among the Romans. A working knowledge of Latin is worth more than the weight of its word roots. It is an exercise in reverse-engineering our own language in order to understand how all the parts fit together to create a whole.
And as for the greatly exaggerated rumors of Latin’s death? Latin teachers squall and writhe in horror when confronted with this rumor as evidence of Latin’s obsolescence, but I couldn’t care less. In arguing for the relevance and necessity for the continued study of Latin, I call on Charlotte Higgins, chief arts writer at The Guardian.

The  most frequent charge laid against the door of Latin – aside from the absurd accusation of elitism – is that it is useless. Why not learn Mandarin, people ask, or Russian or French? For me the pleasure of Latin is precisely because – aside from the points sketched above - it is “useless.” Latin doesn’t help to turn out factory-made mini-consumers fit for a globalised 21st-century society. It helps create curious, intellectually rigorous kids with a rich interior world, people who have the tools to see our world as it really is because they have encountered and imaginatively experienced another that is so like and so very unlike our own.

I couldn’t agree more. My students can “amo, amas, amat, amamus, amatis, amant” with the best of them, but they can do even better than that. They can tell their friends Amy and Amanda where their names come from. They understand how amare meandered north and became amour. They can become enamored, have inamorata, wax rhapsodic about their first paramour. They will know what Catullus meant when he lamented that odi et amo, and take solace in Virgil’s observation that omnia vincit amor.
Latin is alive and well in my classroom, thank goodness. My mother likes to remind me that she was the one who forced me to take Latin in seventh grade, and like John Webster’s kids, I moaned and groaned about having to study a dead and hopelessly irrelevant language. But thank goodness for my mother’s stubborn insistence. My students are far more accomplished readers, writers and students of the world for their years spent among the Romans.
Posted by Unknown at 7:56 AM