A Hand at Cards 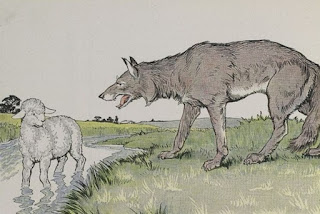 Okay. It's that time of year again; time for my 8th grade to discuss A Tale of Two Cities, Book III, chapter 8: "A Hand at Cards." This one really throws the students into a tizzy each year and I've learned to treat this chapter with some respect and forethought.

The refrain: "Mrs. Lahey? Are we having a quiz today? Because I really did not get last night's reading" greets me before homeroom every year. Every year, I consider keeping this chapter for class time - why freak them out unnecessarily? But every year, three or four students get it. And that triumph is worth risking some frustration on the part of the other students.

I teach a copy of the novel that includes comprehension questions in the margins - The EMC Masterpiece Edition for those teachers out there - and while these comprehension questions usually help students gauge whether or not they are on top of what's going on in the story, the questions in this chapter only serve to underline how little they are understanding. The students arrive at school a little discombobulated, for just as they are finally getting their arms around this book, this chapter tests them. I don't have eighth grade English until the end of the day, so I usually hear the refrain at least five or six times before our class. I like to smile and remain impassive, giving up no information other than the unspoken promise that they will have fun come seventh period. If I've done my job right and they trust me, I can usually build up a head of anticipation over the course of the day.

"A Hand at Cards" picks up just after the big moment at the end of the previous chapter "A Knock at the Door." Darnay has just been denounced by the Defarges and "one other" unnamed accuser. As "A Hand at Cards" opens, Miss Pross is out in Paris, grocery shopping with the help of Jerry Cruncher. They are ignorant of what has just taken place back at the apartment, and when they stop at a bar to purchase wine, and Miss Pross runs smack into her long-lost brother, Solomon. Now, Solomon is one bad dude. He has stolen from his sister, taken advantage of her love, and has been out of touch for ages, but she remains steadfast in her love for him. She claims he's the only man on earth worthy of Lucie, and despite her obvious delusion, it's clear she adores him. She's thrilled to see him, but rather than swoop her up in an embrace, he yells at her to keep quiet, and reveals that he's known she was in Paris all along. The poor woman - all she wants is one kind word from him: "Say but one affectionate word to me, and tell me there is no thing angry or estranged between us, and I will detain you no longer." Clearly, Miss Pross has a wee case of codependency.

Cruncher interrupts their awkward greeting to point out that he knows Solomon as "John," from the Old Bailey so many years ago when John (then Barsad) testified against Charles Darnay. Cruncher asks Solomon to explain himself.

But just as Solomon admits that his name was Barsad back then, Sydney Carton appears on the scene, as he has been out looking for creepy Solomon/Barsad. Carton tells Miss Pross and Cruncher that Solomon/Barsad is what's known as a Sheep of the Prisons, or mouton. There were hundreds of these moutons in the French prisons, often prisoners themselves, who turned spy in order to gain their own freedom. In other words, Barsad worked as a fake prisoner in order to gain information about prisoners, information that will save his neck and maybe earn him some cash. No wonder he wanted his sister to lower her voice when she shouted out his real name - he would be in constant peril around Paris, and he needed to guard his identity carefully.

Carton asks Barsad to go with him to Tellson's Bank for "a talk." Quotes are mine; not Dickens'. Barsad isn't happy about it, but understands he should comply, as he knows Carton has seen him emerge from the prison and could turn him in if he wanted.

At Tellson's Paris office (the same office from the grisly "Grindstone" chapter), Barsad informs Lorry, who has been sitting in front of the fire in his office, that Darnay has been re-arrested. Barsad knows of this through his spy network of Sheep, of course.

"...this is a desperate time, when desperate games are played for desperate stakes."

And so the game begins.

Here's where things get a little challenging for my middle school students. The game of cards spoken of in the chapter title is metaphorical. There is no literal game of cards going on; the cards are units of power, and Carton defeats Barsad with a winning hand. But we'll get to that hand in a moment.

Carton's goal? "Now, the stake I have resolved to play for, in case of the worst, is a friend in the Conciergerie. And the friend I purpose myself to win, is Mr. Barsad."

Barsad quips that in order to win this reward, a really valuable one, "You will need to have good cards, sir."

Ah, but Carton does, and he proceeds to list them ("run them over").

But first, he drinks. Brandy, specifically. Now, if you remember - Carton was a big drinker when we first met him, and once can only assume he's got a tolerance suited to this sort of high-stakes drinking. However, Barsad knows that the more booze Carton consumes, the more rash he will become, and the less control Barsad will have over Carton's behavior. As Carton has information that could get Barsad killed, Carton's drinking makes Barsad uncomfortable. And Carton wants Barsad to feel as uncomfortable as possible.

Carton begins to describe the cards held by both players.

Barsad's first card: Barsad a Sheep of the Prisons, and he is also English. This works well for Barsad in that an Englishman is under less suspicion than a Frenchman. Barsad: 1, Carton: 0.

But, Barsad is still in the employ of one Pitt (William Pitt the Younger), an Englishman, and enemy to the Republic. The Republic has been looking for Pitt and has not been able to find him, and they consider him a traitor. Because Carton knows this, Barsad: 1, Carton: 1.

Carton plays his Ace: "Denunciation of Mr. Barsad to the nearest Section Committee," and invited Barsad to "look over your hand carefully, Mr. Barsad," and consider his hand. Unfortunately for Barsad, "It was a poorer hand than he expected."

Turns out, there are cards that even Carton knows nothing about, but Barsad knows these losing cards are included in his hand. He lost his job in England and can't go back, he knows he is registered in Madame Defarge's knitting, and that the people registered there inevitably go to the guillotine. He can't flee France, and if he's caught, the Defarges will reveal their evidence against him and denounce him. Barsad: a total bust, Carton: Full House.

And oh! Oh! Great word: Tergiversation, from the Latin, tergiversatus, to turn one's back, to turn renegade, forsaking a former position of allegiance. All things Barsad has done. It's a great word for him.

Barsad considers his cards long and hard, but knows he's going to have to fold.

"You scarcely seem to like your hand," said Sydney, with the greatest composure. "Do you play?"

He stalls, and Carton threatens to play his Ace: Denunciation, and soon. He takes another drink, just to make Barsad a bit more nervous.

Barsad goes for the sympathy card - pity for Miss Pross' feelings for her brother, and Carton cuts him off at the knees: "I could not better testify my respect for your sister than by finally relieving her of her brother." Ouch.

"Here, Mr. Lorry became aware, of where he sat, of a most remarkable goblin shadow on the wall. Tracing it to its source, he discovered it to be caused by a sudden extraordinary rising and stiffening of all the risen and stiff hair on Mr. Cruncher's head."

Cruncher, the Honest Tradesman grave-robber, knows that the only thing buried in Cly's grave are paving stones. He knows, because he went there to steal the body in order to sell it to a surgeon, and found the stones himself (NB: it was common practice for grave robbers to exhume bodies and sell them to surgeons for anatomy practice).

That's a great card. Barsad cannot hope to outlive denunciation if he's in communication with a man who is supposed to be dead, working as a sheep of the prisons. That, Carton claims, is a "plot in the prisons, of the foreigner against the Republic. A strong card - a certain Guillotine card! Do you play?"

And of course, Barsad does not. He folds and throws himself on Carton's mercy. He has to get back to the prisons, and asks Carton to reveal his proposal. Carton, ever the hard-drinking man, pours the final glass of brandy out on the hearth, watching it as it drops. This, my friends, is a big moment. It seems incidental, moment, but it's huge, and announces Carton's redemption.

"So far, we have spoken before these two [Lorry and Cruncher], because it was as well that the merits of the cards should not rest solely between you and me. Come into the dark room here, and let us have one final word alone."

Next chapter: "The Game Made." And it is. Carton knows what he's going to do, and just as the Revolution had to happen, so too, the novel draws to its inevitable close. 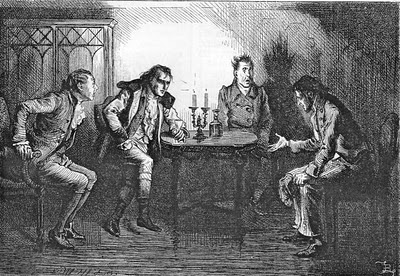 Email ThisBlogThis!Share to TwitterShare to FacebookShare to Pinterest
Labels: A Hand at Cards, Darnay, Dickens, Tale of Two Cities, teaching