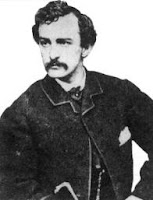 I took a [very] informal poll, and it turns out that people in regular, non-dorkish professions never experience this.

People run up to me in public and toss out Latin phrases, with huge grins of excitement, expectant, waiting eagerly for approbation.

My husband is an infectious disease doctor, and people never approach him in public and holler the names of fungi or bacterium. People never run up to him and yell "Pseudomonas aeruginosa!" or "Aspergillis fumigatis!" as he's topping off his morning coffee.

But this happens to me. It happened to me this very morning, in fact.

And then disappeared into the next aisle, in search of a breakfast sandwich.

And this isn't the first time this has happened to me.

It's pretty predictable - I get "semper ubi sub ubi" a lot, paired with a guffaw, from former Latin students with a sense of wit. Sometimes I get "semper fidelis," which is a little weird, as I was never a Marine. Once, at the library, I got "dulce et decorum est pro patria mori!" and I'm rather sure that person had no idea that they were hailing me with a jaunty greeting from a World War poet, "It is sweet and right to die for one's country!"

Is this something that only happens to Latin teachers, or do teachers of other languages get this treatment as well? Just wondering.

NB: Apologies for the re-post; I've been pretty sick and the words slowed to a trickle. There's not much interesting in the ones I was using, either: "cough," "popsicles," "sleep," and "phlegm."
Posted by Unknown at 8:00 AM