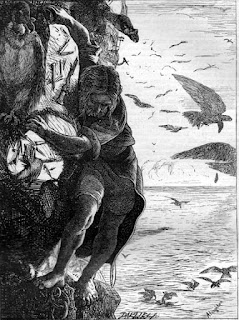 Happy 200th birthday Charles Dickens! In honor of The Man's bicentennial big day, I post this tale about the teaching of Dickens. It had previously been over at the Core Knowledge blog, but as I have moved on to poetry in both of my English classes, I'm reposting it here.


We are currently reading A Tale of Two Cities in the eighth grade, and things are heating up in France. Dickens is deep into his fire and water metaphors – the French Revolution as rising fire and rising sea, “the firm earth shaken by the rushes of an angry ocean which had now no ebb, but was always on the flow, higher and higher, to the terror and wonder of the beholders on the shore…”
Today’s discussion will focus on chapter 24, “Drawn to the Loadstone Rock.” I asked them to look up the meaning of “loadstone rock” over the weekend and to think about how it might figure in the chapter, why Dickens might use that title for this particular chapter. I happen to be a big fan of titles, particularly chapter titles, and Dickens is at his metaphorical best in A Tale of Two Cities. The symbolism and allusions lay thick on the ground, and even the youngest students can’t help but stumble over a couple by the time the Reign of Terror begins.
I adore teaching this novel. This novel is where even my most literal-minded students make that leap from the literal to the figurative. Students who have been steadfastly rooted in the facts and just the facts (“why doesn’t the guy in ‘The Tell-Tale Heart ’ just move his chair somewhere else when the heart starts beating again?”) suddenly emerge from the darkness, and see. They see the Fates in the guise of Mme. Defarge and all that knitting, they see that wine is more than just wine, blood more than just blood. Gorgons, scarecrows, resurrection men. Their eyes widen, breath quickens, and hands shoot up in the air, and it’s like watching a small miracle take place. I call it their Dorothy moment, the moment black and white text switches to Technicolor.
This transformation happened to a young 8th grade girl last week, and she’s been on a roll ever since. This morning, I gave over a period of composition class so we could listen to a CD of Patrick Stewart performing A Christmas Carol. We got to the part where two children emerge from under the cloak of the Ghost of Christmas Present. The children are grotesque personifications of humanity’s Ignorance and Want.

“Yellow, meagre, ragged, scowling, wolfish; but prostrate, too, in their humility. Where graceful youth should have filled their features out, and touched them with its freshest tints, a stale and shrivelled hand, like that of age, had pinched, and twisted them, and pulled them into shreds. Where angels might have sat enthroned, devils lurked, and glared out menacing. No change, no degradation, no perversion of humanity, in any grade, through all the mysteries of wonderful creation, has monsters half so horrible and dread.”

As the scene ended, one student raised her hand, and I paused the disc. “Those children – they are like The Vengeance in A Tale of Two Cities. She’s the personification of the vengeance in the people of St. Antoine, and those children are the personification of the bad stuff in people.”
Sweet. The day has been a success.
This was a girl who, just two months ago, could not identify the simplest metaphor. She was not the student who asked the question about “A Tell-Tale Heart,” but she may as well have been. It’s not her fault; those neurons responsible for identifying and interpreting figurative speech simply had not joined up yet, but then, about halfway through A Tale of Two Cities, they did. And there was light.
I am looking forward to today’s discussion. For the record, a loadstone rock is a naturally magnetic rock, the sort that were used in marine navigation. Here, Dickens is referring to the inexorable magnetic pull of France that will eventually lead Darnay to his imprisonment and death sentence. Dickens is not referring to just any old loadstone rock, he’s referring to the loadstone of Arabian Nights fame. In that novel, a ship was drawn to a gigantic loadstone rock, one so powerful that the nails were pulled from the wood of the hull, and the ship sank. I show my students a beautifulengraving of this scene, and hope someone will make some sort of connection between poor Agib, clinging to the loadstone rock, and Darnay, about to step on to the shores of France.
The students are always exasperated by Darnay’s decision to return to France, even to save his employee, Gabelle, from prison. They know what is going to happen – it’s inevitable, fated. It’s been registered in the knitting, after all. Today should be a good class, as the metronome of those hundreds of footsteps is picking up and the climax of the novel draws near. I still have still five or six literal-minded 8th graders, and one or two may well have their Dorothy moment today. There’s some good stuff in store for them, plenty of fertilizer to fuel those branching neurons:

“The unseen force was drawing him fast to itself, now, and all the tides and winds were setting straight and strong towards it. He left his two letters with a trusty porter, to be delivered half an hour before midnight, and no sooner; took horse for Dover; and began his journey. “For the love of Heaven, of justice, of generosity, of the honor of your noble name!” was the poor prisoner’s cry with which he strengthened his sinking heart, as he left all that was dear on earth behind him, and floated away for the Loadstone Rock.”