I have found that there are only so many words - and so many hours - to go around. Unfortunately, the progress I am making on other projects is resulting on a total neglect of this blog. In honor of this admission of my limits, I am posting a piece I originally wrote for my first blog, The Mill Yard. On my way home from an outing with my sons and nieces, I stopped by a local farm for some frozen ducks, and remembered writing about the day I came face to face with a recently deceased deer's head. 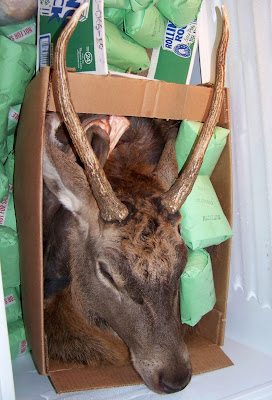 I hate shopping. Hate it. From what I hear, I have always hated it. My mom loves to tell people that while I was a perfect child in every other way, I was a terror in stores. Something about the hum of the fluorescent lights, or the muzak or the unbelievable quantity of crap available for purchase makes me want to flee. And I'm not just talking about department stores. I'm talking about grocery stores, shoe stores, toy stores. And this was long before I became a country-bumpkin-farmer-rural-eater-hermit.

My husband, Tim, can tell when I'm about to blow. My eyes start to glaze, I fidget, and by the time I get snippy it's almost too late. The tailspin has begun and it's best to just get out of the store as quickly as possible. I hear from my sister that my niece Mina may have inherited my fear of shopping gene. She has decided it's best to keep Mina out of stores altogether, that it's no longer worth the public humiliation.

Luckily, I live in Lyme. We have a general store and a small artsy gift shop, and that's about it in the retail department. I could travel about twenty-five miles to Lebanon to Route 12A, where someone wisely decided to cluster all of The Ugly. 12-A has all the big stores - Sears, J.C. Penney, Home Depot, Price Chopper, Borders, KMart - but they are isolated in a strip mall purgatory so people don't have to see it unless they go there on purpose. Which I don't. The closest mall is in Concord, I think. Maybe Burlington, VT. I'm not really sure. Both are at least an hour away, so I don't feel any immediate threat to my safety.

I do like the kind of shopping I used to do with my mom in the North End of Boston. We used to walk the neighborhood with our bags and collect one thing here, another thing there. We would wait for the butcher to trim our meats in the thoughtfully placed chairs and talk with the old Italian women until our orders were ready.

I have managed to carve out a similar routine here in Lyme. On Mondays, I drive up to Robie Farms for my milk, cream, cheese, eggs, honey and maple syrup. Betty Sue Robie makes her cinnamon donuts on Monday mornings, so I suppose I could go on another day, but I'm no fool. I get to chat with Lee Robie about how things have been, how it's been tough to keep enough cream on hand because local restaurants buy it all up, and how the chickens lay so few eggs in the winter. His son, Mark Robie, makes their cheese, and sometimes Mark lets me into the cheese cave so I can taste how things are aging in there. He makes a fine Toma, a tasty Gryere and a smooth Cheddar-type farmstand cheese. His cheeses get better the longer he's been at it, but I have to admit that I may have benefited from some of his mistakes because he sells them to me at a discount. Whe I am done shopping at Robie’s Farm Stand, I add up what I owe based on their price list and stick my cash or check in an antique cash register, the kind with the big arm you pull down to make the drawer open. That's my favorite part. If I have forgotten my wallet or am short of cash or can't make change, I just leave a note to that effect in the register and settle up next time.

Most of my meat comes from friends, neighbors, and local farms. I have a freezer full of half a pig, a quarter cow, some bear sausage from an obliging neighbor (it's really gamey but great on pizza with caramelized onions), and a couple of other oddball items I will get around to preparing at some point. My handyman is usually good for some ground venison or a turkey tom once year when he needs to clean out his freezer.

If I need any additional meat, I have a couple of options. Robie Farms sells beef, veal, and the best breakfast sausage I've ever had. Lately, Betty Sue has given Lee permission to sell some of their precious porterhouse steaks, and they are incredible. I go to Recordridge Farm in Lyme for venison, buffalo, boar, beef, chicken, and recently, duck. They also sell maple syrup and eggs. I pick out my meats, weigh them, and figure a total cost. I leave the cash tucked under the scale with a note indicating my name and what I bought.

This sort of shopping is not for the timid. The first visit to a new farm is a intimidating, especially if I have not called ahead. Most farms assume you know the ropes, and it's usually less than obvious where exactly the freezer or eggs are kept. I had two false starts at Recordridge Farm before I actually purchased anything. I had been given specific instructions, but it just looked so wrong. The first time, I went to the right door but assumed the sticky latch was locked, so I went home. The second time, I realized the door actually opened, but when I looked around in what is their tenants' laundry room, I was sure I was in the wrong place. After fact-checking with a friend who buys her meat there, I went back a third time and finally found the freezers around the corner from the laundry room in a dark corner of the basement.

Unfortunately, the first freezer I investigated featured an entire buck’s head. I can only imagine that one of the Recordridge clan had been hunting, intended to save his trophy for mounting, and the freezer was the most obvious place to keep it fresh. It just happened to coincide with my first shopping day. I’m not easily spooked. I even snapped a photo for posterity. I managed to find my ground bison and venison loins in the other freezer. I calculated my bill based on the $3/pound standard, and left my check tucked under the scale.

On the way out of the driveway, I waved to the deer and water buffalo. They graze across the street from the Lyme Elementary playground and often gather along the fence to watch the children play soccer during recess.

My grocery shopping certainly isn't efficient, and sometimes I come face to face with recently killed animals, but I'll take it over strip malls any day of the week.