Learn to Fail Well: One Student's Response to Red Ink 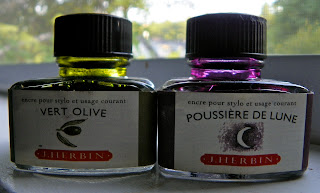 I received the following comment to my post "Out of the Red" in the form of an email, and felt it deserved its own space. If ever there was a student who lived in fear of the nefarious symbolic and psychic power of red ink, it was this student, and yet somehow...she survived - nay, thrived. I so appreciate her articulate response.

There are, however, a couple of typos in it; I hope she doesn't mind if I highlighted them in red.

In short - please don't stop using red ink (at least the figurative kind). You or any of the other incredible middle school and high school teachers we so unknowingly lean on as we grow up. I wish I had encountered more red ink in middle/high school, and it makes me very sad to think our response to studies like Rutchick's is to stop.

I understand Rutchick's premise - red ink is associated with errors and poor performance, therefore, students completing tasks in red ink have increased quantities of errors in comparison to there black ink counterparts. I can't read the full article, and this in and of itself begs a lot of questions (is this intrinsic to red, or any contrasting color to black?  And is the argument this is a social construct associated w the color red, or any color first used to identify fault in the study?), but that's a different story. What I can't understand is the "and so" conclusion inevitable here - and so, we should not use red ink??? Maybe if the following are true - books like Pride and Prejudice, A Tale of Two Cities, The Iliad and the Odyssey are challenging reads for students under the age of 18 - they struggle and loose faith in their ability to critically think...so we should not read them. OR asking students to stand up in front of their peers and present, either a personal piece or a powerpoint, is incredibly anxiety inducing - they often feel frustrated and embarrassed by their performance...so they should not have present. OR (my favorite) asking a student an open ended question is a task beyond a <18yo brain - they find it paralyzing, sometimes tear inducing...so we shouldn't. If the theme of education is that points of stress and anxiety are counterproductive to learning,  or that committing to an idea to only be told that it's wrong hinders education (points that there is quite a bit of literature against) then yes, red pen must also be lumped into a similar category I suppose.

As the student who found open ended questions paralyzing, let me admit to one of my other major flaws - my fear of the red pen. I hate it - it makes me feel hurt, inadequate, frustrated, and angry all at once...and I did not see it enough growing up. Instead, it was a periodic grading injury, easily seen, felt and then quickly forgotten. As a result, I graduated from high school incredibly afraid of the red pen and all it had to represent... and I really regret that. Middle and high schools put students through all sorts of painful experiences that we NEED more of - standing up and presenting in front of you peers for the first time (I thought, no hoped, I was going to die right then and there), learning how to problem solve with problematic classmates, doing a science experiment wrong 10 times in order to finally understand how to do it correctly. We don't attend school to be comfortable, we are put there b/c it pushes us...and pushing isn't easy, and sometimes it hurts. I would argue that middle and high school is exactly where the red pen NEEDS to be - it's where anxiety and fear of failure needs to be. But as teachers, mentors and parents - isn't it our job to guide the student through that experience, not steer them away? To teach them to recognize feelings of anxiety, of failure, of frustration and then overcome? The most successful peers I had the chance to be around as a graduate student and a resident are phenomenal failers (I know this is not a word, but I do not mean "failures", I mean "failers") - they're not handicapped by the figurative red pen, but they've learned to lean into it, to recognize why it's necessary and reap the benefits of that correction, as opposed to remain cowering in the corner trying, paralyzed by the anxiety of being wrong. I struggle in the latter group, trying late and hard to learn to step out of that group in my late 20s...and I wish someone had made me do it in the safety of middle and high school.

Whether educators chose to put dont down the red pen or no, I hope they dont put down all that it symbolizes. No matter your students future profession, whether they steer towards a chronic education path like mine or enter the workforce right out of school, one thing is for certain - they may not use their AP Calculus knowledge, and they may never truly need to remember what year the Emancipation Proclamation was signed....but they are going to fail, and fail gloriously. Right now, on a national level, our students are arguable under-educated in the fields of reading, math and science...lets not also deprive them on the opportunity to learn to fail well.

Note: this response was also added into the comments over at The Core Knowledge blog, where this post also appears.
Posted by Unknown at 4:55 AM