Welcome to the first in our series, This is Adolescence. "Eleven" comes from Lindsey Mead, who writes at A Design So Vast, "One woman's journey to right here." Follow her on Twitter at @lemead. 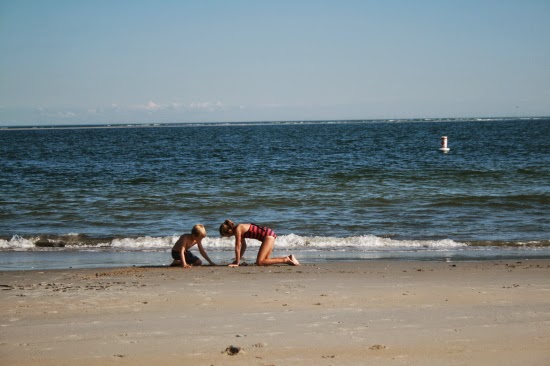 In the last week of each summer, we traditionally spend a day at a beach north of Boston. Lately, these outings have felt like encounters with the tide. Last year we stood on a sand bar, marveling at the way it shrank under our feet as the tide came in. This year my children built a sand wall and watched it disappear under the onslaught of the rising tide.

Eleven is like this. It is the last visible piece of childhood’s sand as the tide of adolescence comes in, inexorable, welcome, but bringing anxiety in its wake, too. That tide whose approach we watch with both wonder and fear will change the landscape forever. It will dismantle many things even as it makes space for new ones.

Eleven oscillates between closeness and the distance I know she is supposed to be pushing for. Mothering an eleven year old is bringing to life all the academic study I did years ago about the mother-daughter relationship. I’m living that which I studied so closely, and though I understand what’s happening intellectually, it is still emotionally difficult.

Eleven walks a neighbor’s puppy by herself. She is responsible and organized, and lets herself into the house I have never seen, collects what she needs, and returns the same way. It is a small universe that she controls by herself. She also sleeps with four stuffed animals, all of which are dogs. She wants to be a vet.

Eleven can beat me in a set of tennis and can always, every single time, get a soccer ball past me. This summer we went for a run together for the first time and she left me in the dust.

Eleven can wear my flip-flops and is almost my height. She runs a six minute mile and is fluent with technology in a way I will never be. She doesn't have her own phone yet but I know that’s coming soon. She still sleeps with the two teddy bears she’s had since infancy. She likes to snuggle before bed and still says prayers that include “thank you for giving me everything I need and most things that I want.”

Eleven started running cross-country for her school this year, and I can’t watch a race without tears in my eyes. There’s something about watching her go, seeing her take flight, cheering for her sprinting towards the finish line, that makes me cry. A wise reader pointed out the metaphor that I can’t stop thinking about: she’s running away from me, and I’m cheering for her, on her team no matter what, even when I can’t see her.  Though I can’t see the part of the race that happens in the woods, I can imagine it, based on my own experiences (of running cross-country as a high schooler, myself, but also of being an adolescent girl).  Her path and my own feel interwoven, but that identification is largely in my head.  The woods she’s running in, and the tracks she makes through them, are hers and hers alone.

More and more, Eleven is in the woods.  Her world is her own. I have less visibility into what she is doing at school and the use of email and instagram has allowed her to develop friendships I don't know as much about. I trust Eleven and we still have a lot of rules about internet access and social media, but I’m aware of her autonomy and growing privacy. This is just another manifestation of the separation that I know is healthy and right.

This was Eleven’s fourth year at sleepaway camp but the first she was homesick. In the sagging middle week of her 3.5 weeks at camp, there were tearful phone calls and sad letters. Then, as the days towards pickup shortened, the mood brightened, and equilibrium was restored. I can't help thinking this was the last gasp of attachment before eleven pushes off for the other shore, for adolescence and young adulthood, for good.

For now, I will curl up next to Eleven at bedtime and listen to her stories about her day and cherish every minute of time she wants to spend close to me, both physically and emotionally. I can see the tide coming in, and I know what it will bring with it. I’m still looking forward to what is ahead and trying to trust, that like on the cross-country course, though she’s about to disappear into the woods, she will circle around and come back towards me.  She will have a smile on her face as she sprints towards the finish line, and she'll see me standing there, and I hope that will make her glad.

Email ThisBlogThis!Share to TwitterShare to FacebookShare to Pinterest
Labels: This is Adolescence