Debriefing: Kill Your Darlings and Absence of Pip 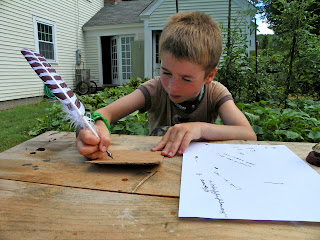 As I lay in bed last night, thinking about how on earth a deadline can come down to the last couple of hours, I calculated - estimated, actually - how many words, how many sentences I write for every one that ends up in the final draft. I actually think my ratio is high; I think I keep in more of my darlings than I kill, but lordy, there's a lot of time spent writing stuff that ends up on the cutting room floor.

Is this normal? I think it is. According to all those books I read, all those interviews, all those advice blogs, I have to write shitty first drafts and put in the hours, and write when it hurts, and write when it's crap. And I do that. I do - and I can't think of any other endeavor where there's so much time and attention put into stuff that ends up in the virtual trash can.

In the meantime, it's actually really nice for my words to be in my agent's hands, to have time away from them while I prepare for the new school year. I am heading in today to make my classroom look great for the first day of school. I have an old, trashy copy of The Odyssey that I will take apart and use for the background of the main bulletin board, then put images from an old copy of a gorgeous mythology book over the top. I'm going all Martha Stewart on that converted-trailer classroom. There will be laminating. There will be decorative borders.

I also have some sad - no, not sad yet - news. Pip has been missing for about five days. I know he's probably fine, and I have not given up hope yet, but I think the neighbors are getting a little sick of my "Heeeeeere kitty kitty kitty" each morning and evening all up and down the street. I will go exploring in his territory today in case he's trapped somewhere. Keep the faith. He's wily and, as a barn cat, I remain hopeful that he's out there somewhere foraging and courting all the female cats in the area.