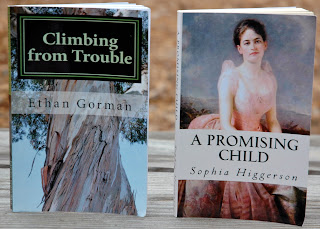 I woke up today, to the first weekend not scheduled to the hilt with visits, dinners, work obligations, or family obligations. I love all of these things, but there have been a lot of them lately, and we really needed a weekend home, as a family.

I asked Ben, my 12-year-old son, what he planned for this vast expanse of unscheduled time, and he said, without even looking up from his book, "Write."

You see, it's November. NaNoWriMo time. National Novel Writing Month, and he means business. Fully half of my students (29 outof 50) are signed up to write their novels this month, in word counts raging from 10,000 (6th graders restricted by me due to their organizational challenges) to 30,000 (Ben) to 50,000 (Me). I have to get my butt in gear as it’s the 5th and I am behind on my word count.

Last year, 28 students "won" NaNoWriMo and were presented with a gift certificate at one of a few self-publishers. The coupon offered up the promise of a bound galley, with free shipping, and their very own ISBN. According to Ethan, the ISBN was about the coolest part of the project. Two examples of completed galleys are pictured above. One student, Sophia Higgerson, is editing her galley and plans to sell it online. As their loyal teacher, I had to read the books. Sophia would only lend me her galley for 24 hours, so last night, I tucked in with A Promising Child. It opens:

Frost stayed late in the winter of 1899. He froze carriage wheels in the streets and curled his way across every building so that the windows shamelessly revealed the kisses he had bestowed upon them the night before. So subdued was Frosts' hostess, New York, that she still lay in the arms of Morpheus when she was meant to wake up and face the coming spring.
And the days dragged on; morning after frigid morning followed by freezing night; Frost would not relent. Businessmen refrained from going to their work before noon, as carriages were not warm means of transportation; ladies would not leave their houses to visit friends for fear that they would die of cold before they reached the inviting entrance halls that sat like warm, golden ovens, waiting to bake any visitors golden brown.

Sure, the opening paragraphs reveal the author’s affection for British Victorian novels, Edith Wharton, and Leo Tolstoy. She channels the stiff yet lavish atmosphere of Wharton’s turn-of-the century New York and captures the sense of longing and loss that pervades Anna Karenina. Such evident imitation would make for a book review rife with labels such as “derivative” and “imitative,” but in this case she is to be forgiven. At least by me. I lent her both Anna Karenina and The Age of Innocence, last year, when she was an eighth grader at Crossroads Academy.

That’s right. Sophia Higgerson was thirteen when she wrote those opening paragraphs.

And then there’s my book, a steaming heap of putrescence, a rapidly decomposing collection of words that is worth little more than the record of its stunted word count and horribly problematic narrative structure. I think there might be a couple of good phrases in there, if I’m lucky. The beginning is no “Twig: population 189,” that’s for sure.

But then a bit of magic descended on P.O. Box 214. I opened my box and there was Teri Carter’s name. Hallelujah.

Teri is a talented writer I met, along with about ten other talented writers, over at Betsy’s blog. We became followers of each other’s blogs, and before I knew it, I was sending Teri drafts, urging her on to write, receiving photos of her new puppy. Ah, the internet. Writers as far away as the U.K. and Australia, writers of memoir, opinion pieces, literary fiction and erotica, women I have never met, have become friends. Smart, kind, talented writer-type friends. These writers are meeting in Chicago, and I can’t go. I was terribly bummed out, but I am all better now. 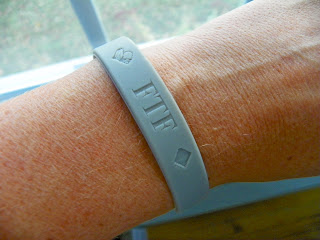 From Teri: "On the one side, The Forest For the Trees, in honor of where our small but sarcastic support group got our wheels. Betsy gets her due. On the flip side, the letters FTF (yes, you guessed it) with an open book-in-progress on one side and a closed book on the other. A reminder that we can - we will - get from here to there.

I’m feeling the love. Thank you Teri, thank you ladies, thank you Betsy. Raise a glass for me out there in the windy city. I will be at home, finishing the fucker.
Posted by Unknown at 6:54 AM