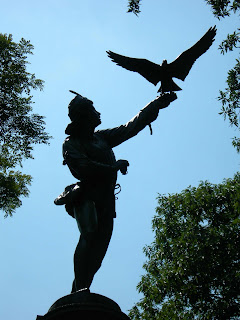 I don't say this out loud very often, but I love my job. I love going to work every morning, I look forward to seeing my students, I love the subjects I teach. I know. I'm so lucky. I took a twisty road on the way to this life, but I am ever so grateful for it.

But last week sucked. Last week was an unfortunate confluence of failures, doubt, anger, and frustration.

Before I explain, I know that right now, there are millions of people who would be grateful for a crappy, low-paying job, let alone a wonderful, low-paying job. I tread carefully on the patience of the un- and under-employed when I talk about my workplace frustrations. But last week, I wanted to walk away from the classroom and dance a little jig on my way out the door.

Last week, I was reminded of just how challenging middle school students can be. They are creatures of extremes. One minute, I am teacher of the year in a students' eyes, and the next, that same student is tossing his books on the floor with an angry flourish, speaking daggers to me as I ask him to conjugate amare. He won't even fall for my magical thinking; forcing him to publicly declare "amo, amas, amat, amamus, amatis, amant" did not result in anyone feeling the love.

Luckily, these extremes dictate that with each frustration comes an equal and opposite jubilation. In exchange for one students' daggers, another student might thrust his hand in the air, eager to impress me with his recollection that catachresis is "an elaborate metaphor that makes a surprising or unusual comparison, like those daggers in Hamlet!" One moment like that can spackle my depressions beautifully.

But last week, down was up and up was down and I became convinced I had no business being in my classroom, inverted as it was.

Context: All three of my Latin classes had tests, and I knew going into it that there was potential for bloodbath. This was the sixth graders' first big assessment of everything they have learned so far this year, and the upper grades were being tested on really tough concepts such as the passive voice (e.g. The chair was moved by me) and indirect statements (e.g. Catullus thinks that the girl loves the sparrow). Hell, this stuff is hard in English, let alone in Latin. I knew it was challenging stuff, but I also knew that I had prepared them well. Worst case scenario, I could curve the tests and then those tests could be repurposed as the instrument by which they learn the material in the end. Often a poor result on a test is just what some students needs to get serious about figuring out what they were supposed to have learned in class.

The sixth grade tests went pretty well for students who had been invested in the class since day one, but for the handful of students who thought all they had to do was memorize and regurgitate some endings, the test was a rude awakening. Part of my job, as a middle school teacher, is to move students from regurgitation to interpretation and application by the time they head off to high school. The first time we ask a sixth grader to make that move toward a higher level of thought, they tend to freak out.

And they freaked out. They freaked out on a grand scale. Unfortunately, that vibe went out into the ether, the seventh and eighth graders followed suit, and I was left with a pile of tests that looked as if they were bleeding red ink.

Two days later, in English class, I handed out tests on subjects and predicates. Crossroads Academy is heavy on traditional skills such as grammar, so my students gain an unusually in-depth knowledge of English (and hopefully Latin and French) grammar. This particular test was on subjects (complete and simple) and predicates (verbs and complete predicates), and was a test I have given for four years now. It's a cakewalk even considering the two questions that always catch the students who do not read carefully. Here's one: find the simple subject and the complete subject in "To the left of Ursula's house is an orchard of peach and apple trees." I will give the answer at the bottom of this post. Grades on this test tend to be high, and the students love that I change up the names every year so they all appear in the test in silly and entertaining scenarios.

What's up with that?

When I handed the tests back at the end of the week, my students were duly embarrassed, and in the end, their epic fail served as a learning experience. I required each English student to re-take the grammar test in class and debrief me on the answer to each question. I rewarded them with the points I was going to have to curve the tests anyway. In Latin, I handed out blank tests and, in well-planned out pairings, asked the students re-take the tests as an open book exercise. The pairings were required to not only find the correct answer, but to explain why all of the other options were wrong. It went really well, and in the end, one of the students who had initially failed said, "You know, now that we have gone through every question, this test really wasn't that hard." And her classmates agreed. Even the student who had pointed out that her test grade was the second-lowest grade she had received in her entire academic career admitted that she simply wasn't paying close enough attention to her translations.

Combine those failures with the ongoing headaches and time suck related to some students' lack of organizational skills, and I was exhausted. As far as I was concerned, I was just going to have to either quit or change my approach altogether. And change is hard. Like learning to become left-handed in old age.

What I needed was an equal and opposite jubilation to cancel out - or at least soften - the blow.

Friday afternoon, seventh period, I got just what the doctor ordered. My students will be performing scenes from Romeo and Juliet and I Henry IV next week, and I had to test them on their line memorization. Not their blocking, fight choreography, costumes, props, or interpretation, just their memorization. My expectations were low - the week had made me wary of disappointment - but this is what I discovered, there in my classroom, amidst the colossal wreck of the week: A heartbreaking Juliet, a brilliant Prince Hal, a terrifying Montague, a charismatic Hotspur.

They emoted, they transformed, they transcended, they understood. It was as if the students had conspired to give me a gift, just the thing I had been yearning for but did not even know existed.

As I plan my lessons for this week, inspired to start all over and make a fresh start, I am making a few adjustments. I had planned my daily cultural literacy lessons around British Victorian literature - Frankenstein, David Copperfield, Oliver Twist, Dracula - as we are reading Great Expectations in seventh grade and A Tale of Two Cities in eighth, but I've changed my mind. I think I will make room for Yeats, The Second Coming, Chinua Achebe, and Ozymandias, what with their widening gyres, lone and level sands, and things falling apart all over the place.