One of the best parts of teaching is that the personality of each new day depends on the whims, hormones, collective night's sleep, and mood of the students. Add to that the vagaries of weather, seasons, and the particular day's proximity to dances, vacations, holidays, tests, and birthdays, life as a teacher can get pretty darn unpredictable.

I thought I'd share one day - a normal day - in order to prove my point. Today was a pretty average day, with its highs, which I can share, and its unsettling and sad lows, which I can't. The full portrait, with all its confidential warts, is much more honest, if a lot less aesthetically appealing. And therein lies the rub. Teachers can't talk about the warts, and the lovely parts are so very lovely.

It's mud season in New Hampshire, and many of the dirt roads our students travel each morning are either impassable or highly treacherous. The temperature has been unusually warm, so the road crews can't even count on early morning freezes to firm up the ground they are supposed to level out. The school busses can't drive on the dirt roads, so everyone's morning commute is out of whack.

With this unseasonably warm weather comes blue skies, hot classrooms, open windows, the beginning of "Can we have class outside?" season and spring fever. The eighth grade is particularly susceptible to this fever, as they are heading off to high school next year, and for most of them, they are just so done, done, done with middle school. We are usually spared from their disdain and overt rejection until late April, but this beautiful weather promises to bring on early cases.

I watch my younger son make the bus with mere seconds to spare, tell my older son to be careful on his bike, jump in my car for the three-mile commute to school, and the day begins.

Homeroom: I share early morning organizational and attendance duties with a co-worker. Today, I had the usual tardies and exploding lockers to deal with. I teach first period, so I really need the prep time to focus and prepare my notes, but thanks to my ancillary role as organizational mentor, today's prep time is not to be.

My prep period, now known as Return to Algebra I: My return to math is beginning to pay off; we are learning about factoring binominals, and I am often manage to complete my homework without gouging my eyes out with a pencil. This is real progress. This is also a post for another day. Thank you to my math-teacher readers, by the way. Your advice in email and comment forms have been most helpful, particularly where those pesky negative integers were concerned.

Latin 8: We are preparing for next week's Medusa Mythology Examination. The entire middle school takes the National Mythology Exam, but only the eighth graders take this much more difficult test. The students did a divide-and-conquer maneuver on the weighty and detailed Medusa syllabus, and each student researched their topics. They each created an outline and quiz, and present their material to the class in turn. This year's theme is "Monsters and Malicious Mortals," so the topics range from Typhon and Echidna's hideous brood to the Labors of Hercules, Perseus, Jason, and Medusa's lovely family. Did you know that her sisters, the Graiai, shared one eye and one tooth? Talk about sibling rivalry.

Latin 6: It's time for the sixth grade to show me that they really know the endings for the first and second declensions, so it's crunch time. I'd recount the play-by-play on the review of a, ae, ae, am, ā, a, ae, ārum, īs, ās, īs, ae, but that's about as exciting as it gets. Don't get me wrong, we have a lot of fun together, what with the mythology, togas, and our recent translation of The Three Little Pigs, but today was simply about the endings. Sometimes drilling endings is just, well, drilling endings. They really can't translate well if those endings are not right there on the tip of their tongue, so a-drilling we will go until they know the first couple of declensions.

English 7: It's Tuesday, so it's independent reading day. Monday is grammar day, Thursday is vocabulary day, and Friday is for spelling. It took me a while to submit to a regular schedule, but the students find it predictable, and it helps them remember what books to bring to class. As the students hand in their independent reading forms, I see the title of Sanjay Gupta's new novel, Monday Mornings on a particularly literature-ravenous student's list. I had thought about getting my husband that book, so I ask him, "Michael [not his real name], how was Monday Mornings? He replies with a shrug, "It was all right. It started out pretty good, but then it got all God out of the machine at the end." I squinted at him for a moment before I realized what he meant. "You mean deus ex machina? You mean like from Horace?" "Yeah - that. God out of the machine. It was like the author didn't know how to end the book so he just made up some crazy plot stuff to end it." I was beside myself with excitement. I taught this class deus ex machina back in January. The term had come up in the eighth grade when we got to the end of A Tale of Two Cities, and as I teach the same cultural literacy item in both grades, I shared it in the seventh as well. This kid not only remembered the term, he applied it in its English equivalent English to an independent reading book. Today rocks. If nothing else goes well, today rocks.

English 8: Two of my students have been begging me to let them do a Purim song and presentation for the class as the cultural literacy item, so I agreed. They dressed up - one as Queen Esther and one as England (yes, the country) - to present the history of Purim, explain the holiday's traditions, and they performed a song for the class.

Their proud parents gave me permission to include a picture. 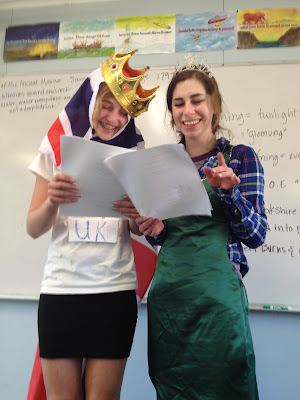 They received a huge round of applause from their classmates.

When I'd finished cultural literacy (the poem "Rime of the Ancient Mariner" by Samuel Taylor Coleridge and the parts about the albatross around the Mariner's neck and the quote "Water, water everywhere and not a drop to drink"), and the vocabulary word of the day (slough: the "slew" form and the "sluff" form, and the fun fact that the "sluff" form, as in, "snakes slough off their skins," comes from a Middle English word that actually means "the skin of a snake") we got to the real lesson of the day.

For the past five years or so, the middle school students have been begging me to give up one day during the poetry unit and dedicate it to the writing of poetry. This year, I relented, but in order to up the ante, I asked them to create an English or Italian sonnet, a villanelle, or (I said, chuckling,) a sestina. I did not really expect to get any finished poems at the end of class - in fact, I said I would not collect the poems at all. The point of the lesson was for them to get inside the form and poke around a bit. Test the fences. Kick the tires. Mix up some metaphors and construct some rhymes, no matter how slant.

Did I mention the unseasonably beautiful weather?

I allowed the eighth graders to work outside. Some handled it well, some could not focus, and I received exactly one finished poem at the end of class. Frankly, that was one more than I expected, and everyone else made some interesting progress, so that was fine. But lesson learned. I kept the seventh grade in and received eight finished poems after 40 minutes of work time. Of the eight, four were villanelle.

I won't go into a definition of the villanelle here, as Poets.org does a wonderful job here. If you don't make the jump, trust me. It's a complex and incredibly challenging poetical form. They have loved the villanelle we have read in class, but to write one, well, that's a real accomplishment.

The end of the day is - I'm so sorry, I'm tired of this expression too, but it's the only one that truly fits - like herding cats. I let my older students out of class, and then I help the youngest students re-do what they un-did that morning. The youngest students are still getting used to keeping track of the many books and folders and assignment sheets and assorted details of middle school life, that packing up is as Sisyphean a task as the morning's unpacking. Except, instead of large boulders, we roll around putrid lunch bags, orhpaned copies of Julius Caesar, and crumpled homework assignments.

When the door slams shut behind the last student, the silence is truly lovely. For the first hour, anyway. When I notice that that the middle school is too quiet without the kids, I pack up my own backpack and head home to the work of grading and planning. For whatever tomorrow might bring.
Posted by Unknown at 6:35 PM