Something Comes From Something

Friday was the last day of classes before we head into a week of rehearsals for the middle school musical. The students provided the perfect conclusion to the year in the form of their King Lear creations. I asked them to create visual representations of the storm - both physical and psychological - in King Lear. That's all I gave them in terms of parameters. I said that the success of their projects hinged on depth of thought, creativity, time, and dedication. Some of the lovely and amazing projects were handed in on Tuesday, and they were lovely. As I had promised to complete my own version of the project as well, I presented it to them on Friday, and then the rest of the class presented their creations. 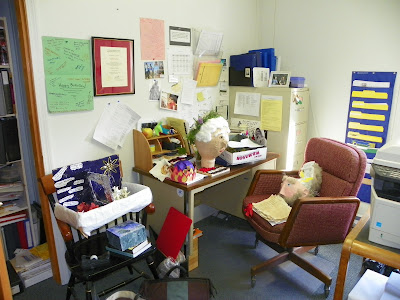 When I arrived at my office in the morning, there were projects everywhere. On every surface, on my chair, on the floor, on my desk. 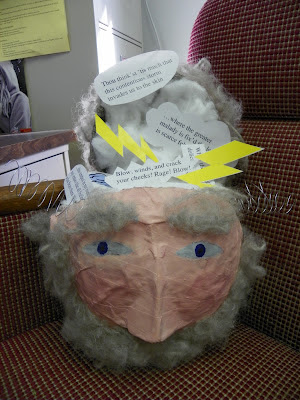 Storms exploding out of heads, 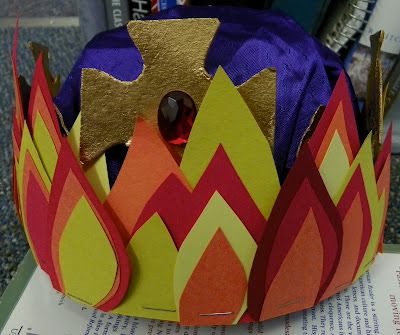 self-immolating crowns of purple and gold, 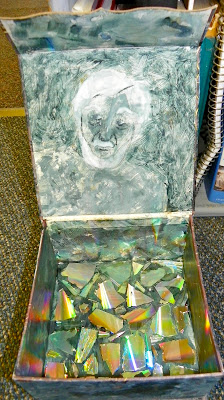 beautifully painted boxes depicting Lear's loss of identity and his inability to see himself clearly.

The creations were smart, creative and revealed the students' understanding of what Lear experienced out there, on the heath, as he descended into madness.

This last creation is a personal favorite of mine. The student had asked if he could present a sort of performance art piece in order to represent his take on Lear's storm. I was skeptical, but as I have written over and over again, my students never cease to surprise and amaze me. I told him I trusted his judgment, and gave him the green light for his performance. What I love most about this creation is that it required him to commit, to put himself out there and pull off a performance that could have easily fallen into frivolous silliness. Yes, we laughed, but not because the performance was funny. We laughed because we loved it, and because we loved him for his courage.

We laughed because his was the last presentation, on the last day of class, in their last year at Crossroads Academy. I laughed because this is what they will remember, after they have left our small, rural community for high schools all over New England.