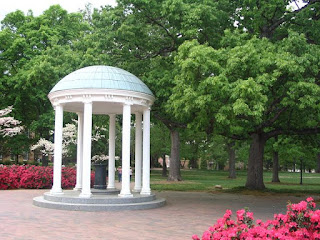 Okay. Someone mocked my legal education on my Facebook page. Gauntlet acknowledged, and I throw down my own in return.

I see your mocking, Matthew, and raise you this, my one publication at UNC Law. No, I did not make law review, but my one article in our school newspaper raised far more eyebrows than my classmates' analysis of choice of law in the North Carolina Law Review (just kidding, fellow Tarheels, don't sue me, I failed the choice of law question on my Civ Pro exam and clearly have no idea what I am talking about). Plus, I seriously pissed some of my classmates off.

Naive and idealistic? Sure. I was in my 20's. Immature and rough around the edges? Certainly. Do I adore my alma mater? Absolutely, and with all my non-native Tarheel-lovin' heart. However, this piece, hauled into the sunlight out of the dark vault of the past explains why I was not cut out for the practice of law and much better suited for teaching. I knew what I was getting into; I married into a family of lawyers - lovely and honorable people, all of them - and they warned me. But again, I was in my 20's.

Do I stay or do I go, I ask in my essay. Well, as it turns out, I went. A long time ago, in fact. But the owner of the licence plate in question below? She stayed, and I wish her all the best. However, it is worth noting that after her summer internship with a law firm, she has a new license plate. Concidence?

From Mere Dictum, 1997
Newspaper of the University of North Carolina School of Law

Before entering law school, I assumed the answer to the following question would be an easy one: Facing an ethical dilemma that involves both legal and human obligations, which code of conduct do you look to first? Do you look to your own source of human ethics or do you pick up a copy of the Rules of Professional Conduct? My assumption has always been that as humans, people must rely first their human code of conduct in order to frame all other considerations. Now, halfway through law school, I am dismayed to find that among my classmates and future colleagues, the answer to this question is not so predictable.

I had heard from attorneys I know that every law student or lawyer will reach a point in their education where they find themselves in what I have come to call a defining Moment. A real capital-M Moment in which you are faced with doubts and questions about your place in a profession that will challenge your sense of self, values and balance. I assumed I had been through my defining Moment in the panicked days after finding the first of my grades on the wailing wall, but no, that was a tiptoe through the tulips of doubt. My Moment came in Professional Responsibility class, in the wake of our very first class discussion.

The ethical dilemma we were faced with in class was interesting and raised some complex issues regarding the duty of an attorney to protect client confidentiality versus the duty of that attorney as a human being to ameliorate significant suffering of others. However, the dilemma itself was not what prompted my Moment, it was the discussion that followed regarding conflicting duties that threw me for a loop. I walked into class ready for the discussion, having mulled over the whole conundrum between class meetings. My view was that a person is a human being first and an attorney somewhere else down the list. Personally, I am a human being first, wife and soon to be mother, and once I become an attorney, it will rank somewhere below these other identities.
Agreement on this point, however, was far from unanimous. One person in class responded to my statement by claiming that once she is an attorney, she will be an attorney first, foremost and above all else. One by one, hands were raised, and every time I thought someone would speak to the importance of something other than the Rules of Professional Conduct, I was disappointed. Suddenly, I was faced with a decision I suppose I would have to face sooner or later: Do I stay or do I go?

That same morning, I had been forced to park next to a car I usually go out of my way to avoid. A student here at UNC Law has a license plate that reads ME+LAW=$. I tend to avoid this car in order to stave off the nausea I see when I realize that out of all the statements this person desires to express to the world, this is his or hers. This statement also serves to broadcast to the public that lawyers out of the pages of John Grisham books and New Yorker comics do really exist - and come from UNC Law.

A pair of maintenance workers was fixing a light in the parking lot near this car. While climbing out of my car and organizing myself for the hike to the law school, I overheard their conversation. They were joking about the sort of lawyer - the sort of person - who would own that car. The passed suggestions back and forth, none of them flattering, a lot of them unsuitable for print. These two men were disgusted by the possibilities this license plate suggested, and when they noticed me getting out of a car with a UNC Law sticker on the rear window, the glare that passed from them to me was palpable. I was humiliated. I wanted to tell them about all the good people at UNC Law, all the moral and ethical people I admire and strive to emulate. I prepared countless replies as I approached the maintenance truck. I smiled as I passed by, and in reply, they repeated their glare.

In the wake of these two experiences, I went home rather deflated and truly uncertain as to whether or not I would return the next week. For the first time, I questioned what I know is my calling simply because I know I do not want to spend the majority of my life in a profession made up of people who care more about the Rules of Professional Conduct than their fellow human beings. I do not want to be around a person whose main statement to the world is that he or she picked the law as a path to financial gain. I certainly do not want to live or work in the same community with lawyers who feel that as one's responsibilities and obligations as a lawyer rise in importance, one's responsibilities and obligations as a human being diminish in inverse proportion. Hence my aforementioned Moment. Do I stay and try to improve what I see to be a deficit in the profession, or do I run screaming in the opposite direction and hope I never have to retain a lawyer such as this? After much thought, I have chosen the former, but I remain wary.

Obviously, there will be times when a decision one may make as a human being may not be the same decision one may make as an attorney in the light of attorney-client relationship. However, the ethical obligations of an attorney must be considered in the context of all these other identities - human, man, woman, mother, father, and so on - because if you do not have your humanity as a touchstone to guide the part of you that is a lawyer, you are destined to become just the sort of attorney the world has come to despise.
Posted by Unknown at 5:14 PM