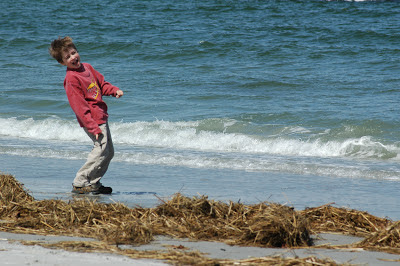 Yesterday was a great day. Besides the obvious electoral happiness, I had the opportunity to quote Henry VI on Facebook before I went to bed, and that does not happen very often. I mean, I'm a dork, but I restrain myself for the appearance of normality.

"Why ring not out the bells aloud throughout the town? Dauphin, command the citizens make bonfires And feast and banquet in the open streets To celebrate the joy that God hath given us."

I'm not a church-going sort of gal, but the sentiment felt right.

This morning, I woke up in a particularly exuberant mood and quoted John Adams on Facebook (shut up, that's what exuberant dorky people do on the morning after a great event), hoping someone would understand my happiness and relief.

"Wherever a general knowledge and sensibility have prevailed among the people, arbitrary government and every kind of oppression have lessened and disappeared in proportion."

This quote is from Adams' essays protesting the Stamp Act, and, yes, I am happy to report that two people recognized it.

Let me back up. While the general election was going on, a bunch of civic-minded 8th grade students took ownership of the electoral process, and spent hours to build a very elaborate polling booth with curtain, lockbox, and Latin phrases (e pluribus unum) painted on the outside. They convinced the every student of average courage to vote. They even dragged the lower school in when they had the opportunity, and I heard from my son Finnegan (9) that (and I quote), I GOT TO VOTE!!! He was rather twitterpated about the gravity of the event and delighted that he'd been asked for his opinion on electoral matters. See above picture for an approximation of his happiness. That's how I felt when I rushed out between classes yesterday to vote at Lyme Elementary School. Twitterpated and delighted to have been asked.

On top of all that good stuff, I got to spent last evening tweeting the election for Edutopia and the New YorkTimes' Learning Network at #EduElection. I am fortunate enough to write for The New York Times' Learning Network so I had an entree into the occasion, but I greatly admire the two writers from Edutopia who had the wherewithall to organize the Twitter hashtag for students on election night. Sarah Mulhern Gross and JonathanOlsen deserve some serious kudos.

I was all about #EduElection last night for almost five hours...except the moments when I got confused and tweeted to the nonexistent hashtag #EduEducation. I actually got to tweet some [insanely ineloquent and inane] answers to wonderful student questions like this:

(brace yourself, I warned you, I use the word poll three times in 140 characters) 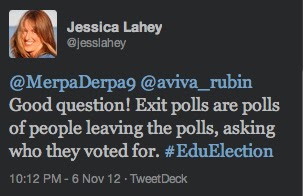 But finally, when the news came in that the election was being called for Obama, I called it a night on Twitter, peeled my flattened and sore butt off of our kitchen couch, and went to check on my boys.

No, I did not resist the urge to wake and inform them of the election results despite the [very] late hour. Benjamin (14) remembers my intrusion around 11:30. He says, "I remember because I was upset that you woke me up" but Finnegan does not. He was snuggling with Rotta the Huttlet (Jabba's son; long story, he looks a like a booger in the guise of a plush toy) and rolled over when I whispered the election results in his ear.

I don't care so much if he remembers the precise moment of Obama's victory; just that he understands the historial significance of my nocturnal annoyance. I gently whispered in his ear that Obama had won a second term, and, of equal importance, in his home state of New Hampshire, women won all. He rolled over and went back to sleep, but I know he understood. His waking hours are full of strong women who will never forget to remind him to celebrate the joy that God hath given us.
Posted by Unknown at 6:45 PM