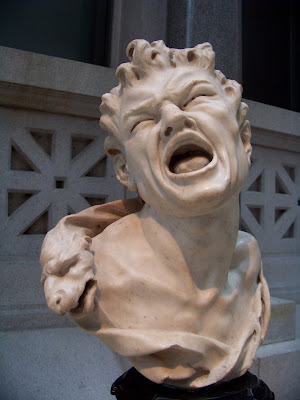 I'm torn this weekend. I'm going do something I would not usually do. A round-up.

I like blog posts with an arc, with a thesis, allusions, metaphors, a conclusion that brings the reader back around to a satisfying resolution. I like blog posts that transport and tell a story  on more than one level.

Round-ups can read like laundry lists, capsule summaries of all the subjects, peeves, and brain farts a blogger doesn't have the imagination to fashion in to a larger arc.

So...there's that. But in order to get some of the stuff off of my chest that, if I come up with arcs for each, could fill up six to eight blog posts, I'm just going to go all Spark Notes on this one and get these topics out of the way so I can clear the boards and get down to the posts I really want to write. I may have to take a shower after I hit the "publish" button, but sometimes a girl's got to do what a girl's got to do.

1. What's up with people who teach for one year and write a book about it?

God love Tony Danza. He rocked feathered hair and flared yet very snug jeans on Taxi, and while I was not a fan of Who's the Boss, anyone who can ride that blind, three-legged pony for eight seasons deserves some sort of cred. Not sure what kind of cred, but cred nonetheless. I received an advance copy of his book about teaching in a Philadelphia public school for one year, I'd Like to Apologize to Every Teacher I Ever Had, and I got a little bit pissed off.

I was torn: I love getting advance copies of books because I feel so very special, as if someone really cares about my opinion. Even better, it means that someone believes I have the influence to help an author in their efforts to sell said books. For publishers reading this post, I do. I'm very powerful.

Because come on, admit it, advance anything is exciting. I remember the first time I got my hands on a copy of the New York Times Saturday Styles section on a Thursday. I hardly knew what to do with myself. It was as if I was starring in that 90's show Early Edition, where the main character magically receives a copy of the Chicago Sun-Times delivered the day before it is published and has to decide what to do with all that information.

But back to advance copies of books, specifically Mr. Danza's. Normally, I dive right in, and take advantage of that fleeting feeling of exclusivity (I'm only special until the publication date, when everyone else can get the book in stores), but this book sat on my nightstand for a while because I just wasn't buying what Tony Danza had to sell. It got me all worked up every time I looked at it and I just could not bring myself to read it. The advance copy came out ages ago (the actual book has been out for four months, if that's any indication), and I have finally dipped in. And out. And in. And out for good.

Because here's Mr. Danza's problem. First year teachers are idiots. I feel so very, very sorry for the students I taught in the first year of my teaching career, because I was hanging on by a thread. I was about 24 hours ahead of them on a good day. Some days I was a couple of hours behind, and God bless 'em, they pretended not to notice.

I know Tony Danza had his teaching certificate so he was kinda sorta qualified to teach English, and I was kinda sorta of moved when he cried (I may have been a trifle overwhelmed myself at the time), but note to all first year teachers in search of a book deal: I'm far more interested in what comes after that first year. I'm interested in the story of that teacher after the shock wears off, the brightness has dulled, and the bushy tail hangs limp.

I won't even go into the fact that he conducted parent-teacher meetings armed with a camera crew. I can't even imagine how weird (and yet oddly reassuring) it would be to interpose a camera crew in the delicate dance of the parent-teacher conference.

Which leads me to number two.

2. Students are easy, parents are hard.

An educator friend of mine had to call the police on a parent this week. S/he could not tell me the details of his/her parent-teacher conference (of course), but it required three police officers and resulted in an arrest for disorderly conduct.

I'd love to write an entire blog post about this topic, but I can't. I love my job, and would like to keep it. I don't have an anonymous blog such as Tales in Education, one of my favorite education sites. I'd kill for an anonymous blog. I even fantasized with a writer friend about creating a website that publishes writers anonymously, sort of a clearing house for people like Mrs. Q (who used to be anonymous, anyway) or teachers afraid of being fired for talking about the most challenging aspects of educating children. It would never work, but a girl can dream.

3. I finally got around to reading William Poundstone's book, and no, I am not smart enough to work at Google.

4. It will take me three years to get through Algebra I.

I took the third trimester last year, the first trimester this year, and will have to complete winter trimester next year. I was doing great until December, when I hit the Bermuda Triangle of report card writing, letter of recommendation writing, and mid-year writing assessment grading. I had to admit to my students that I can't do everything, and that they would not be seeing me in their Algebra I class any more. I was doing pretty well, though, and I'm pretty darn proud of that. I was getting my weekly review sheets in early, consistently scoring in the 90s on my assessments, and participating in class. But I'd warned my students that Algebra I was extracurricular for me, I had to put my teaching first. Maybe next year. Lord knows if I will ever make it to Geometry.

5. A giant squid was captured on film.

It's incredible how happy this makes me. I'm kind of obsessed with them. 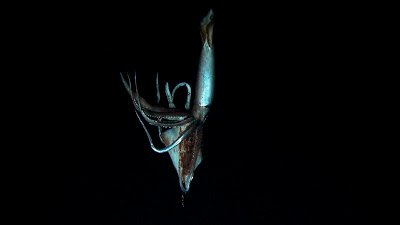 7. The secret is out, and John T. Tierney finally said it in The Atlantic: "Why Teachers Secretly Hate Grading Papers."

There are lots of great quotes in this article, but this pretty much sums it up:

No matter how hard you try, you realize there's a good chance you're grading some students more harshly than they deserve, and giving others more credit than they deserve. This doesn't have anything to do with favoritism (a whole other problem), but with human error and weakness. Your temperament and disposition change over the hours or days you spend grading an assignment. In fact, your frame of mind can change in moments for any number of reasons: Five weak essays in a row can put you in a foul mood; fatigue can set in; a too-hot or too-noisy room can set your nerves on edge. Maybe you're suddenly reminded that you have only 48 hours left to finish clearing out your deceased parent's apartment. How can any teacher be confident that his or her assessment of student work is always fair and accurate in the face of such vagaries? An essay that earns a B+ at one moment might earn a B- the next day. It shouldn't be that way, but any honest teacher will admit it's true.

6. I loved both the idea and the reality of Nikhil Goyal's book, One Size Does Not Fit All: A Student's Assessment of School.

I try to condition my students to have great expectations for their lives, so when Nikhil offered to send me an advance copy of his book, I was thrilled (and so very, very special and influential in the publishing industry, of course).

Nikhil is 17. Seventeen. And he's written a really good book about what's wrong with American education. He understands the history and evolution education policy, and clearly explains his issues with the fine kettle of fish students and teachers find themselves in today.

The book is great. That said, I'd kill to have Nikhil in my writing class, because I have a few notes for him on his style and I can't wait for him to develop a distinct voice, but he's seventeen years old and he's influencing education reform. He's mixing it up with the experts. Grown-up experts with decades of experience in education under their collective belts.

Every year, I have a few students who are good, smart kids, but disengaged from their education. When their parents fret over this lack of engagement, and worry about their children's future, I let them in on a little secret: someday, there will be one thing, a perfect thing, that will catch hold of their kids and light a fire in their hearts. I saw this happen last year to one of my students, Ellie Pschirrer-West, and the change in her was stunning. It was like watching a miracle take place right in front of me. Well, not in front of me, because it happened in science class, but still.

I plan to purchase a copy of Nikhil's book for my independent reading shelf, if only to show my students what can be, what it looks like when the fire is lit, and a kid finds their calling. My middle school students are not (yet) interested in debating the merits of No Child Left Behind or  value-added modeling as a way of assessing teacher effectiveness*, but they are interested in the story of a teenager who is taken seriously in The New York Times, CNN, Forbes, HuffPo, NPR, NBC, and FOX before he's even eligible to vote.

But...while I loved that Nikhil was quoted in the recent New York Times piece, "Saying No to College," I don't think I will tell my students about Nikhil's opinion on school:

Nikhil Goyal, a 17-year-old high school student in Long Island, published “One Size Does Not Fit All: A Student’s Assessment of School,” contending that some students are better served by ditching lecture halls and treating the world as their classroom.

Because if my students go home and tell their parents that I recommended they ditch school and treat the world as their classroom, my next round of parent-teacher conferences may just require the assistance of law enforcement.

I think that's it. Phew. Thanks for reading, and I promise, a real post with beginning, middle, and end is coming later this week.


*Super-Geek (and by super I mean SUPER) Nate Silver weighed in on VAM, in the wake of the Gates Foundation justifying its use in assessing teachers.
Posted by Unknown at 7:12 PM