Luck Be a Lady

Last week, I wrote about the fact that I was tempted to get chickens again. I admit it. I missed their presence. I was all about chickens for years, until a marauding weasel ate them all over one 18-hour period. I used to write a blog about farming and chickens, and my old business card even featured a chicken. A chicken with a quill pen. 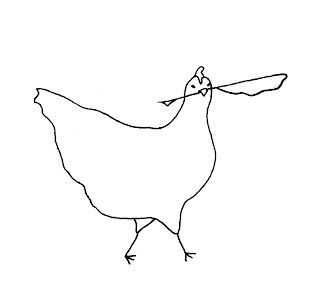 I wrote an entire book about all of that farming and chicken stuff called The Education of a Flatlander. It did not get published, which was a good thing. That book stunk as much as my chicken's manure, but it did give me experience in writing a 70,000-word book. That may seem like a middling accomplishment, writing a crappy book that never got published, but when I have another 70,000-word book due in a mere six months, I'm glad I've written a book before. That book is more than just a compilation of words; that book represents an arc, a structure, my experience as a writer.

But back to the chicken thing. I had a gorgeous flock - a flock, perfected. One Black Australorp, an Arucana or two, a couple of Buff Orpingtons, a Silver Laced Wyandotte and a Barred Rock. Yes, they all had names, and they were gorgeous in their diversity.

And then a weasel ate them all while we were away for the weekend. Our neighbor's daughter discovered the carnage, and while I think she's survived the trauma, it's not something you want your average five-year-old to stumble upon after breakfast. I swore off chickens for a year or two. I simply could not handle the stress and disappointment. I even adopted rabbits that used the chicken tractor space - the most gorgeous chicken tractor ever, designed and built by my father for my 40th birthday. 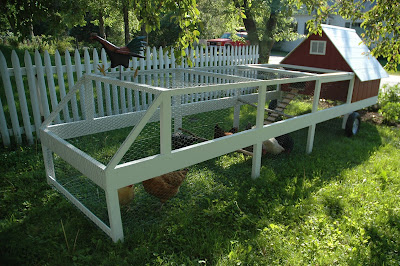 But as this spring grew into summer, it seemed criminal not to fill that lovely chicken tractor with my own chickens. Just a few. I pushed the urge aside for as long as I could, and then I went to my friendly neighborhood farmer, Betty Sue Robie, and asked if she might just have a few extra chickens this year, four or so that she might be able to part with for a price. She admitted that she had a couple of "wandering" Hy-line reds who were driving her nuts; I was practically doing her a favor to take those garden mauraders off her hands.

Last night, she collected a couple of the wanderers from their night-time roosts, and this morning, I became a chicken farmer again. 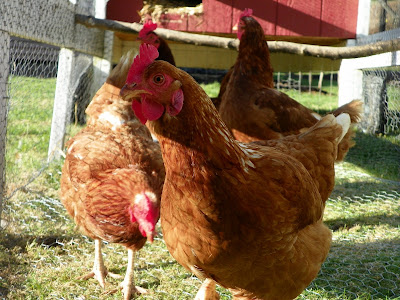 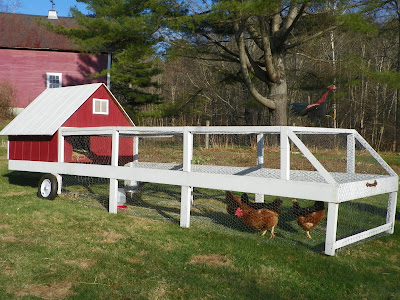 They are not used to confinement, and are still figuring out where to lay their eggs, but we'll get along fine. They will satisfy my need to have chickens, to have eggs, and to have a disposal system for our kitchen scraps. The rabbits will be fine in their smaller, more modest, rabbit tractor.

And now I deserve that image of a chicken with a pen in its mouth. I do love that chicken graphic and the writer she represents, not to mention the graphic designer who first dreamed her up. That chicken, trotting about my yard with a pen in her mouth represents those years when I struggled through my first 70,000-word manuscript.

My next manuscript is due November 1. I will write it in the company of my chickens, my rabbits, and the creatures who ushered my first manuscript into being. And that feels just about right.
Posted by Unknown at 5:50 PM

Email ThisBlogThis!Share to TwitterShare to FacebookShare to Pinterest
Labels: chickens, rabbits, The Education of a Flatlander., writing