I have spent much of this fall writing, but in order to retain my sanity, I head out after a full day of words to tack up Joy and take a walk in the woods. Joy is my friend's horse, but she's given me this amazing gift of a companion so I can get away from my laptop and into the fresh air. 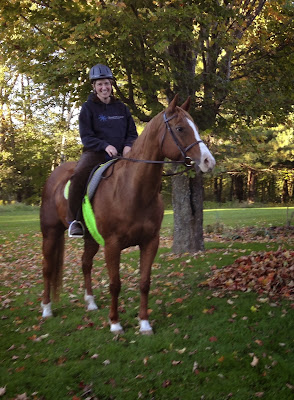 I grew up riding, so my days on Joy have been such a gift. My husband, Tim, is wary of horses, but I've managed to drag him along on a couple of trail rides. I usually put him on Joy, as she's calm and relatively predictable, and I ride some other horse, usually someone who needs some mileage under her young hooves.

The horse I picked today had bucked before, but I've been on bucking horses many times, so it was no big deal. She'd burst into a gallop once before in a field and let out a huge buck of happiness as she did so, but I rode it out fine and wasn't particularly worried about her.

But today she really went for it.

I took Tim up into the field in the picture above, and asked the mare I was riding for a trot. She interpreted my light squeeze as an invitation to merge onto Thunder Road and we were off. A couple of strides in, she let out a mighty leap and a buck and some sort of twist, and I was tossed onto the ground. I don't remember a lot after that, but Tim and I walked the horses back to the barn, handed them off to friends, and took off for the ER.

One hint that it was time to head to the hospital was the fact that when Tim asked me where I'd been that morning, where I'd been yesterday, what my book was about, what my book was called, I had no idea. Yesterday, I was at Brewster Academy all day, speaking to students, helping students with some writing, and speaking again to the community, so that was kind of a big thing to forget. 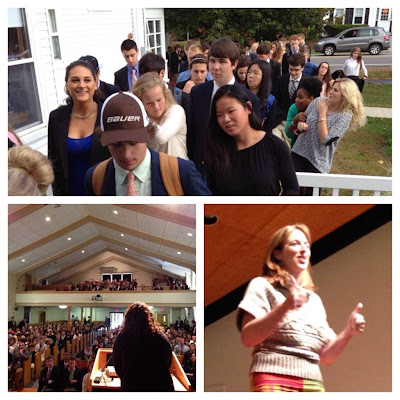 Not to mention the fact that I could not remember my book, the thing that's filled my brain up and overflowed out my ears for the past year.

It all came back as we drove down to the hospital, but I noted how ironic it was that we had just been discussing my enthusiasm to dive back in to my YA novel about...a boy with memory loss.

One ER visit and a shot of non-steroidal anti-inflammatory meds later, I'm much better. My head is killing me, and I will most certainly be seeing my chiropractor tomorrow, but I am feeling lucky that the contents of my brain were only temporarily lost.

As I was passing time in the ER on my iPhone, I noticed that my new Vermont Public Radio commentary had just gone live. It will air Monday morning at 7:55 AM, but you can listen to it at the link I'll post in a second. It's about my afternoons spent with Joy, for which I am also very, very grateful.

You can listen here. 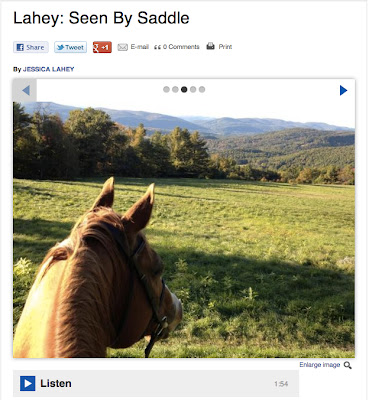 Email ThisBlogThis!Share to TwitterShare to FacebookShare to Pinterest
Labels: VPR