When Opportunity Knocks: The Anatomy of a Viral Post, Part I

This is a repost, because...well...it's been one year. One year since I spotted a post somewhere on the interwebs about a study on allowing kids to fail. One year since a writer friend first read my article on that study and sent me an Atlantic editor's email address because, she said, my article might fit there. One year. 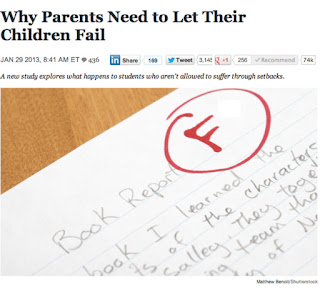 What a difference one week makes.

I wrote an article one week ago Saturday about the value of failure. I submitted it to various media outlets, it was rejected by most, but a lovely writer named Helaine Olen told me that the piece sounded like a great possibility for The Atlantic. Yeah, I laughed, I'll send it, but the Atlantic is on my bucket list, a periodical I had not really considered because it's, well, the Atlantic.

I sent the article to the Atlantic editor Helaine recommended around 10:00 AM in between a Latin class and an English class (we do, after all, have three whole minutes to ourselves between classes), and at 2:00 PM, I found out my article had been accepted.

I ran around the campus, a stupid smile on my face, and then settled down to the reality of editing.

The Atlantic editor was insanely good. Her edits were perfect. She tightened the piece and every change only rendered it more pointed and effective. I have been incredibly lucky with editors. K.J. Dell'Antonia and Robert Pondiscio are two of the best I've ever worked with, and I figured the gods had simply smiled on me. But three great editors? Whatever they get paid, it's not enough.

The article, "Why Parents Need to Let Their Children Fail," went live first thing Tuesday morning, and by Tuesday afternoon, it was obvious that something was going on. It quickly went from the top story on the National page to the top story overall, to the headline story and the number one most successful article on the site. And it stayed there, more or less, for almost a week.

On Wednesday afternoon, Fox News called. They asked me to do a segment on Fox and Friends from their Manchester studio. I was able to speed down there, get made up in about sixteen pounds of makeup, do the segment, and speed back in time to teach Robert Frost at 11.

Here's the clip for that video; there's no way for me to embed it.

As soon as the segment was over, however, they emailed back to ask me to be on the show again on the weekend broadcast. As I had meetings scheduled for Monday in NYC, I decided to head down for the weekend.

I arrived on the Crossroads Academy campus during our "Discover the Difference" day, and despite my sixteen pounds of makeup, prospective parents managed not to laugh and shook my hand while I talked up our English, Latin, and writing program. And then I washed my face for about an hour.

The weekend in NYC was a whirlwind, and Fox and Friends Weekend was a hoot. Besides, my lovely and handsome husband accompanied me to NYC and my parents took the kids, so we managed to have a wonderful (if busy) early Valentine's Day weekend in the city. He even sat in the Fox green room and held his liberal tongue.

Here's the link to that appearance, again, with sixteen pounds of makeup that looks good on air, but trust me, in person, it's just silly.

As of today, "Why Parents Need to Let Their Children Fail" has been shared 82,000 times on Facebook. I mean, really. It blows my mind, and I've hardly had the opportunity to revel in the fact that I was published in The Atlantic.

I really should not be allowed to hope for more.

But today, with three signatures on an agency agreement in triplicate, I celebrated a huge milestone. I signed with the agent I've been submitting to, stalking, complimenting, adoring, and respecting for six years. Six years.

What I've learned from this week? Patience is a virtue.

And when opportunity knocks, ride that puppy for all it's worth.

Here's part two of this story.

P.S. My second article at The Atlantic just went live. "Introverted Kids Need to Learn to Speak Up at School." I have a feeling my vacation from negative comments has just ended.

P.P.S. I had the thrill of having two articles on The Atlantic's top ten articles, as this new piece has been shared over 4,000 times now...wheeee!

P.P.P.S. Here's the audio of my appearance yesterday on WBUR Boston.