When knowledge and experience collide in one perfect lesson, learning is transformed from such feeble ingredients as "education" and "instruction" into something more. Something higher than the sum of its parts. Something magical. Transformative. I can smell those lessons coming, because the air in my classroom has that special, pre-lightning storm charge to it. Those perfect lessons can be hard to spot, as they can appear in unexpected forms, of their own accord. I can't plan my schedule around them, because they have their own free will, but if I am vigilant, and keep my eyes open, sometimes I find them underfoot, hiding in plain sight, just waiting to be discovered. 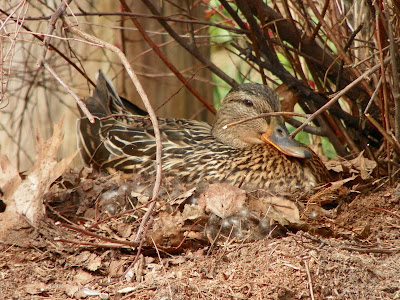 Her nest, carefully constructed from downy fluff plucked from her own breast, appeared yesterday in a rather unfortunate spot. 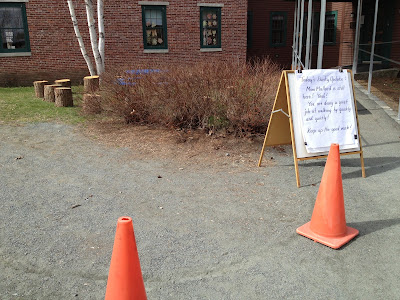 The ramp on the right is the entry to Klee, the main building on our campus, and Mom Mallard's nest is less than two feet from the base of that ramp, hidden between the azalea bushes. Every child in our K-8 school walks by the nest at least six times a day, so between faculty, staff, and students, that's roughly 2,000 feet passing within 18 inches of Mom Mallard's nest. She's been working on her nest for a while - at least for the ten days it takes to lay ten eggs - and we had no idea it was there. When she leaves, she buries the eggs under her plucked feathers, and the deception is perfect. If you were not looking, you would never know a clutch of ten ivory eggs had been secreted there. It's not the spot I would have picked for my own nesting, but who knows what goes on in the a duck's decision-making process?

Today is day two in Duck Watch. On day one, our second grade teacher, Marge, erected a large sign, warning the children to keep their distance from the nest. We set out traffic cones in order to create a line in the sand (there is a literal line in the sand as well, if you look closely at the above photograph) and crossed our fingers.

Marge watched out her window and noticed that as long as the kids keep walking, Mom Mallard stays on the nest, but if they stop for even a quick look, she walks away. Marge has become our Duck Watch point person, and her Day Two sign reads: 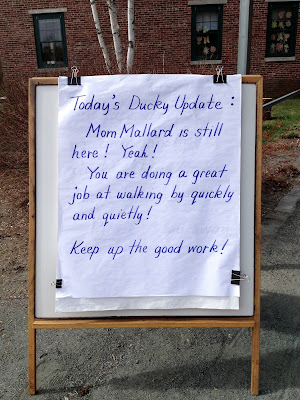 Mallards, or anas platyrhynchos, are also known as "dabbling ducks," and this particular duck has apparently been dabbling in Aristotelian philosophy, because she's presented our students with a lesson on this month's virtue.

Crossroads Academy is a core virtues school, and we (even the ducks) take that part of our mission seriously. The core virtues - prudence, temperance, fortitude, and justice - make it into nearly every lesson we teach and every part of our daily lives on campus. The younger children use slightly more simplistic language to talk about the virtues, but the discussion begins in kindergarten and continues through the more sophisticated language of eighth grade.

This month's lower school virtue is self-control; stopping to think about our actions before we enact them, giving the best of ourselves, and saying “no” to our weaknesses. The middle school students use the term "temperance," but tomāto, tomăto, it's all the same idea.

In my middle school Latin and English classes, we explore the concept of temperance through discussions of Achilles' impulsive rages in The Illiad, King Ozymandias' petulant demand that we "Look on my works, ye Mighty, and despair," Macbeth's bloody, "vaulting ambition, which o'erleaps itself and falls on the other."

This is my favorite part of teaching at Crossroads, even though it took me a year or two to fully commit to the virtues bandwagon. A lot of my prep time is spent setting up opportunities for connection, when the literature and the language of virtues come together in real-world lessons my students can discover for themselves, if they just pay attention and look.

In Stanford's famous experiment on self-control [this link is not to the original study, but it's funny], children were faced with the reality of one marshmallow versus the promise of two if they can just wait for fifteen minutes. The children who were able to wait fifteen minutes for that second marshmallow had better life outcomes in the form of lower obesity rates, higher SAT scores, and higher levels of education. Self-control itself does not make a kid smarter or fitter or more proficient at test-taking, but it's the essential skill hidden within all of those positive outcomes.

Here on our campus, our students must weigh the reality of a quick peek at Mom Mallard versus the promise of ten ducklings waddling around our playground in 28 days. If everyone, even the youngest children, can stay away from that nest, we will all benefit.

Marge explained the situation to her second graders thusly: we get to see ducks a lot, living here in rural New Hampshire. However, what we don't get to see every day is a mother duck leading her ten ducklings across the playground, teaching them to nibble on the grass and find the power of their wings. If we make the right decisions now, and allow her to keep those eggs warm, we will all get to share in the reward, knowing we did our best by Mom Mallard and ourselves.

The sight of those ducklings won't increase Crossroads Academy's scores on the standardized testing we endure each year, but this 28-day education in temperance is not a skill that can be measured with number two pencils and bubble forms.

This afternoon, I plan to hand the following quote to my seventh grade English students:

"Most powerful is he who has himself in his own power."
Seneca, Epistles

I will then send them out to the playground, to spend five minutes in silent study of that quote. I will ask them to ponder the relevance of Seneca's words on this day, in this place. My hope is that, if they pay attention and look, they will find the real-world lesson nestled down, underneath Seneca's words, the lesson Mom Mallard and I have constructed on this beautiful spring day in New Hampshire. 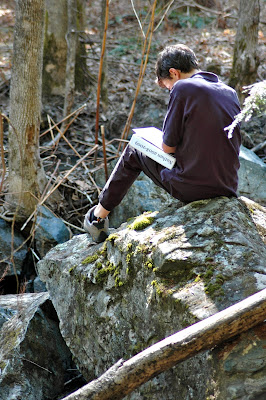 At the very least, they will have learned that conventional wisdom isn't always right; sometimes the eleven birds in the bush are worth more than the one bird in the hand. 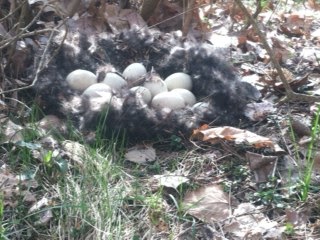 Photo by Mary Howell
Posted by Unknown at 11:02 AM