Today, and Another Trip Over the Atlantic 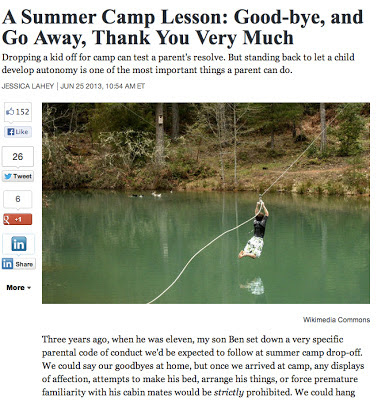 It's been a great first week of summer. The article on boys and education at the Atlantic is doing really well and has been shared on Facebook over 17,000 times. I took Ben to camp last weekend and got to talk about it on Vermont Public Radio, and then I wrote about it for the Atlantic. This piece also marks the debut of my first published title in a major news outlet. "Good-bye, and Go Away, Thank You Very Much." I tend to like titles that don't say much about the piece itself, and my picky editors tend to like titles that actually convey some meaning. Humph.

I'm in New York City right now because I'm taping a segment for the Today Show tomorrow that will run on Friday, June 28, in the fourth hour. That piece is on preventing summer academic slump and I get to present some samples of great summer reading. I'm going to keep those selections a secret until the show airs, but I really have to thank my Twitter and Facebook friends and followers for offering up their favorite books as suggestions.
And the best part of this week? I took those book selections with me to the Eugene O'Neill Theatre and sat on the sidewalk for a couple of hours in order to score some standing room only or lottery tickets for The Book of Mormon. Seemed like a great thing to do to celebrate the demise of DOMA.

Standing room only means just that; you stand at the back of the theater for the entire show. If you want to get those tickets ($27.00 each, you can have up to two per person, there are roughly 22 of these available for every show), you should show up at 3:00. I was there at 3:15 and I was third in line. At five, the wonderfully friendly lottery guy hands out cards and the people who have gathered in the hopes of getting some incredible seats for only $32.00 hold their breath while he pulls cards out of a lottery wheel. There are about 300-400 people gathered for about 25 seats in the front row and in the two front boxes. It's all very dramatic and lottery guy was a hoot. I had reason to hope when he announced the second card and mentioned the person had come all the way from New Hampshire, and yep, it was true. I had scored front row center seats (and a lovely button announcing that I'd won the Book of Mormon lottery).

As I said, it's been a great week.