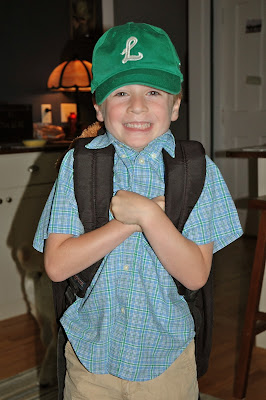 This piece appeared in the Valley News a few years ago, on the first day of school. It remains one of my favorites, because even though Finn's love for Ellie has faded over the years, the memory of this moment embodies everything I love about our tiny community.

We attended a wonderful set of performances at the Elementary School last night. Benjamin stood on stage, dutifully singing holiday songs in the pink-cheeked, deadpan, third-grade style. Meanwhile, down on the gymnasium floor, Finnegan was manically twirling with tongue lolling and arms akimbo, all in pursuit of a glance, a smile, a flicker of interest, from his beloved gold-haired Ellie.

I’d like to say I enjoyed both performances equally (wouldn’t a good mother say as much?) but poor Benjamin’s holiday songs were all but ignored by the audience members within twenty feet of Finnegan’s preschool mating ritual. There were elaborate pauses, dramatic exhalations, jazz hands, and then, mercifully, Ellie giggled, and Finn was invited to sit with her on her mother’s lap to watch the remainder of the concert.

Nothing, not even the memorable rendition of “Wipe Out” as interpreted by the middle school band’s percussion section, could beat that moment.

Concerts, dances and the annual mud season town meetings all take place in this gymnasium. Finn will play dodge ball, dance his first slow dance, argue and vote in this room. However, my favorite event to grace this room, the moment I most look forward to each year, is the first day assembly.

Students, tanned and shining from a summer spent outdoors, race about in front of the school sporting new shoes and backpacks while their parents clutch coffee, visibly relieved by the arrival of new the school year. At exactly 8:10, our Principal ceremoniously rings the school’s bronze bell. Then, beginning with the kindergarten, each class processes into the school individually. Save for a couple of teary five-year-olds, it’s a moment full of happiness and pride.

The procession moves to the gym, where the Principal introduces the teachers, offers up words of inspiration to the students, and orchestrates the moment we have all been waiting for. Eighth graders line up at the front of the gym alongside the kindergarteners, still sniffling and clutching stuffed animals. The oldest students, who just moments ago seemed so little, so young and vulnerable, now appear as giants when matched up with the kindergarteners.

Then, solemnly and sincerely, each eighth grader pledges to mentor and guide the kindergartners as they make their way through their first school year. This exchange has taken place for so many years that the parents of the oldest children can remember when their giants were the sniffling babies. What’s most striking is the seriousness with which this pledge is undertaken by the teenagers. It’s tempting to think of this moment as playacting, a sentimental drama cooked up by the school for the benefit of the parents, but it’s not. It’s a real moment. The big kids really do look out for the little ones, and it shapes the day-to-day workings of the school.

As I watch Finnegan dance, tripping over his own feet in an attempt to find some vestige of a rhythm in the third grader's off-key rendition of “Any Dream Will Do,” I am grateful that this place, these people, will be witness to his soft landings.
Posted by Unknown at 8:00 AM

Email ThisBlogThis!Share to TwitterShare to FacebookShare to Pinterest
Labels: Lyme