It will be one month since I was tossed from a horse and suffered a pretty awful concussion. The first two weeks were all about sleep and acute symptoms. Those weeks were frustrating, but I could wrap my brain around them because I understood that if I still had acute symptoms, I was still recovering. At this point, my symptoms have shifted toward subtle clues that I am not firing on all cylinders, and that if I push myself beyond a certain limit, I will pay for it later.

As the days pass, and I feel better and better, it gets harder to remember that my brain is still recovering. I still need a lot of sleep, and reading and writing tires my brain out faster than just about anything else.

I've had to adapt to reading and writing in very short bursts. I'm up to about an hour at a time if I'm rested. I wrote a piece for the Atlantic over the past couple of weeks, in stops and starts. It was inspired by an article I read in Harvard Magazine, but clearly, my psyche was yelling at me the entire time I wrote. I will be in Washington, D.C., next week on a couple of speaking engagements, and until then, it's time to remember how to practice the lost skill of patience. 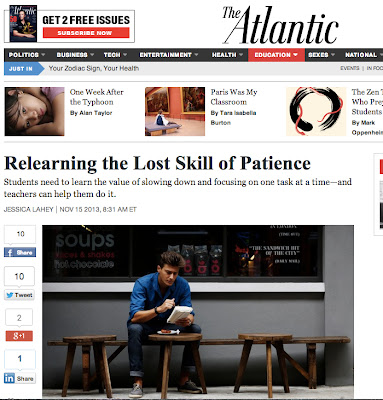 Email ThisBlogThis!Share to TwitterShare to FacebookShare to Pinterest
Labels: The Atlantic