The King is in High Rage


I have been waiting for this day for weeks! The King Lear final projects were handed in today!

I asked the 8th graders to create a visual representation of the storm in King Lear - both the external, tangible storm, and the internal, psychological storm raging in Lear's mind. They may create whatever they want, as long as it is something they can present in class and represents the storm. Most of the projects will be presented on Friday, but five students offered to go today so we could fit all of the presentations in before I lose the kids to the middle school musical and rehearsals next week.

One girl made a copper crown to represent the storm, both interior and exterior. She dyed three different colors of gray to represent the three different meaning of madness - insane, angry, and "marked by intense and chaotic activity." There are two rings, or crowns; the outer ring is Nature ruling over all, and the inner ring is Lear's Kingly crown. The copper crown is punched full holes to represent the unsubstantial nature of his rule, and the myriad aspects of existence that his crown is lacking. The screws holding the two crowns together represent the connection between Nature and mankind. To see the inner storm you must look through the outer storm. If you are wearing it, you must peer through Lear's inner storm to see the outer storm. In her own description of the project, she said: 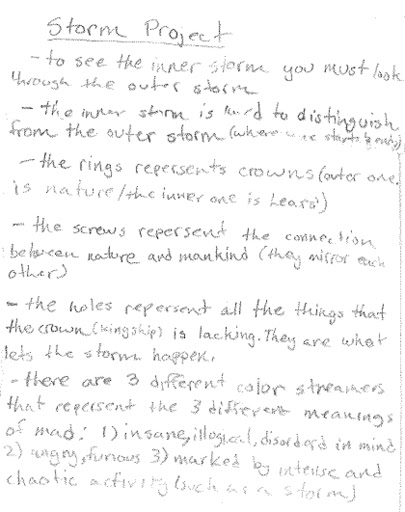 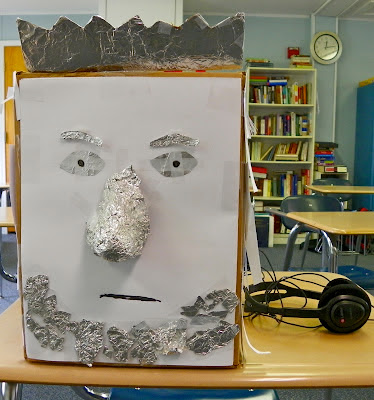 And the interior. The storm that rages inside his head has a soundtrack, music she created by synthesizing the sounds of a storm and various overlays of music. You wear the headphones while wearing the head. It's quite trippy in there. See photo at the end of this post for my experience of this particular project. 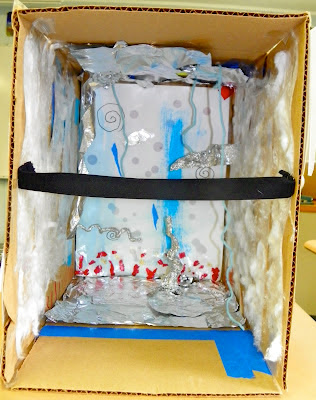 One boy's project was a piñata. The exterior is Lear, of course, and when he beat the head open with a stick, destroying it, bags of Tootsie Rolls fell out. Each bag was tied with a ribbon and a piece of paper listing the elements that precipitated (pun intended) the storm. 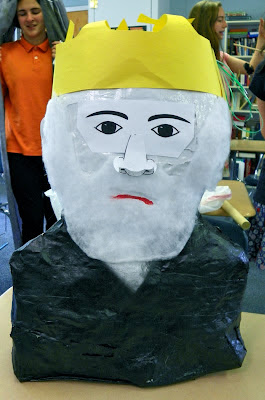 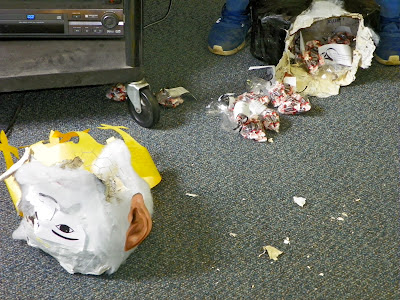 Another girl's project was a box with a glittering "Unnatural" world above, adorned with the ornaments of Lear's reign as King - gold, jewels - and the "Natural" world below. When the box was placed on the edge of a table, Lear's crown totters, on the very edge of falling into the state of the Natural world. The quotes on the crown are from the storm scene. One refers to the external storm, and the other describes the internal tempest in King Lear's mind. 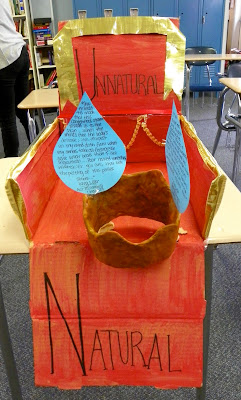 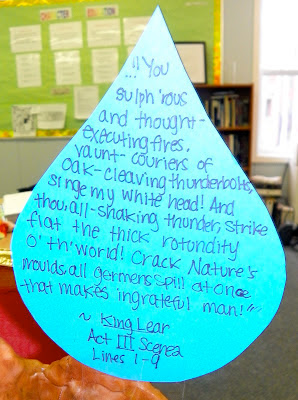 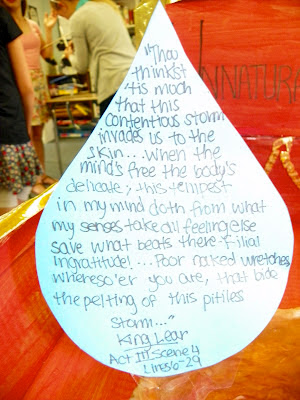 Finally, a girl made a mobile of the storm with Lear's thought in the center: "I am a man more sinned against than sinning." She's going to let me keep this one, and I will hang it proudly from the ceiling of my classroom. 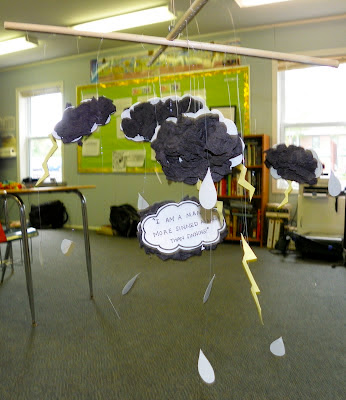 It was a lovely day, even as a real storm brews in our neck of the woods. Tornado watch, hail, and severe thunderstorms are predicted for this afternoon and evening. Unfortunately, I have to be back here tonight for the 7th grade performances of Twelfth Night, so I am feeling a little, well, insane. Clearly, art imitates life. 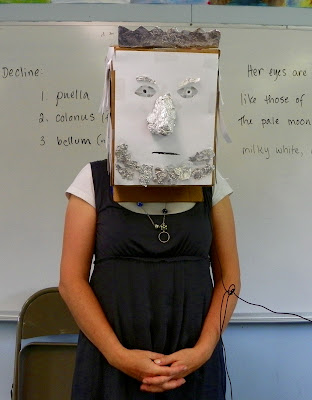