Once There Was a Thing Called Spring 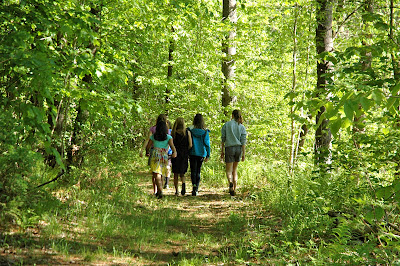 It may take longer for spring to arrive here in New Hampshire, but as a teacher, I think that can be a good thing. As soon as the light changes from gray to golden, the kids can feel that  the the freedom of a long summer is near. This year, we had an early spring that lapsed back into winter, and the kids felt cheated, as if the promise of an approaching summer had been ripped out from under their feet. The daffodils had just begun to emerge from the earth when the snow began to fall again. The best skiing of this New Hampshire winter came after the threat of winter was past and the kids had put their skis away in the basement. But not me. I skate-skied my heart out on the last of the winter's offerings.

When spring came around a second time in April, I still had miles to go and entire plays to teach. As far as my students were concerned, spring had come, and gone, and come again, and it was past time for school to be over.

The seventh grade is coming up on their Twelfth Night performances, so we spend a lot of time out on the playground, blocking scenes. I plan the eighth grades' performances for good fall weather and the seventh grade performances for good spring weather, because it's too loud when they all rehearse in our small middle school at the same time. The eighth grade has the larger parts in our schools' spring musical, so I make sure they memorize Shakespeare in the fall rather than the spring, when they are also trying to memorize their lines in the musical - The Music Man, incidentally.

The eighth grade English class is in the middle of reading King Lear and rehearsing their graduation speeches. We are in the chaos of the storm on the heath, and I have assigned a final project for this book that's...well, unconventional. Sometimes, conventional just isn't going to work, particularly in this second spring. The eighth grade has been asked to create their own visual representation of the storm in King Lear - the one inside Lear, the one outside; all of it matters.. Years ago, I asked my Rowland Hall/St. Marks School students to do the same, and they created some incredible stuff. Sculptures of words, cotton, wool, paper, wire, and velvet, and I was awed. I hear that this time around, my students are creating video and audio presentations as well as the sculptural presentations I have come to expect. I love this assignment so much, I am creating something, too, and I can't wait for the unveiling.

We all have aspirations of summer vacation. I have writing deadlines - wonderful, exciting assignments - that hover out there, just waiting for classes to end. I get to hand a book proposal in to an editor who is actually excited to receive it. I have assignments to write four magazine articles, all about stuff I know little or nothing about, but can't wait to learn. Best of all, a New Hampshire writer friend of mine, Tom Ryan, asked me to write the author interview and its introduction for the HarperCollins paperback release of Following Atticus. There's some more big news surrounding that book that I am not allowed to talk about quite yet, but suffice it to say that I am indebted to Tom and his Harper Collins editor for their faith and support of my writing.

But before all that can happen, I have King Lear and Twelfth Night. I have to make up for my students' waning attention spans with my own manic enthusiasm, and simply pray that we all make it though the musical, final exams, the school trip to Montreal, and graduation.

New Englanders hope for spring, wait through six months of winter, slog through mud season and swat through black fly season. And then it comes. The beginning of the most beautiful season on earth.
Posted by Unknown at 6:50 PM