The first snows have fallen in New Hampshire, and I'm feeling nostalgic. I'm pulling out some old friends, chapters from my first book, one of those books that was best left on the shelf and categorized as a learning experience. Bits of it are solid, most of it is training ground. I will be posting my favorite chunks this month, starting with a piece befitting this cold winter morning in New Hampshire. 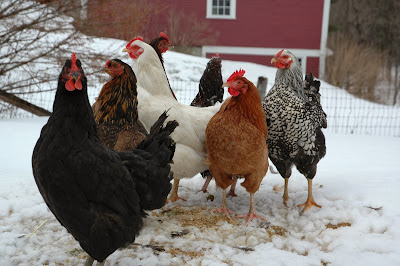 
We got another four inches of snow yesterday, so I will head out and rotate the old shavings to the backyard run and open up another fresh bale of shavings in the coop. But first, I have to deliver their breakfast of hot corn mash with raisins and kitchen scraps. In return for my efforts on their behalf, I can expect a big fat tip. Over easy, with a dash of salt.
Posted by Unknown at 5:29 AM

Email ThisBlogThis!Share to TwitterShare to FacebookShare to Pinterest
Labels: chickens